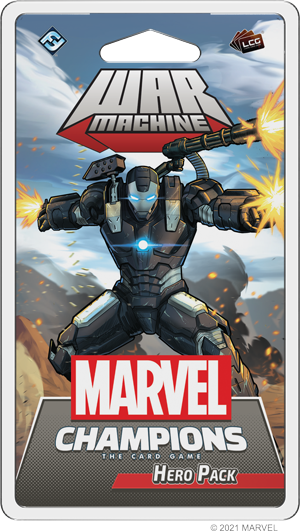 A proud soldier and a longtime friend of Tony Stark, James Rhodes fought for his country as a United States Marine fighter pilot before Stark outfitted him with his very own advanced armored suit. Now, he fights for all of Earth as War Machine, and the forces of Thanos won’t know what hit them!

This heavily-armored Avenger flies into battle in this expansion pack, which introduces War Machine as a brand-new playable hero, along with his fifteen signature cards. With a pre-built Leadership deck ready to play from the get-go, you’ll be eager to unload on your enemies with War Machine’s massive arsenal from the moment you open the box. With tons of powerful weapons and upgrades to play with, War Machine is an awesome hero that is perfectly at home on the front lines. 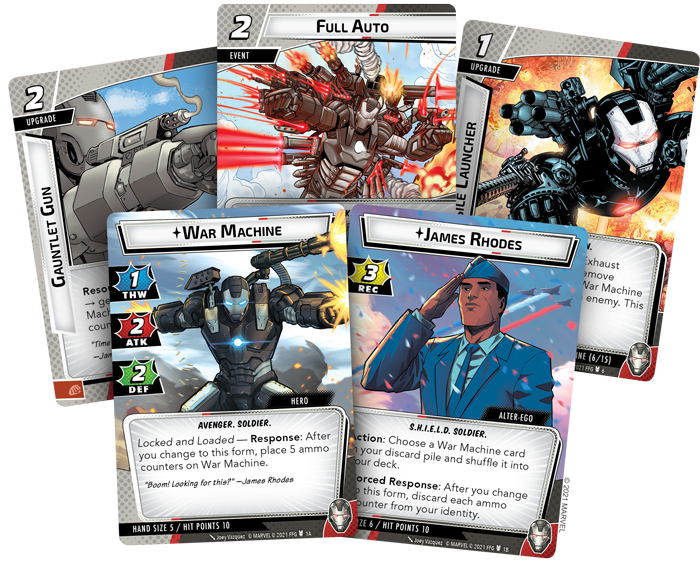 Armed to the Teeth

As a close friend of Tony Stark, it should come as no surprise that War Machine comes to the table packing some serious tech. His playstyle revolves around building up a hefty magazine of ammo counters and then spending them to fuel powerful assaults on the villains and their schemes. Get enough momentum going, and War Machine becomes a truly unstoppable force! 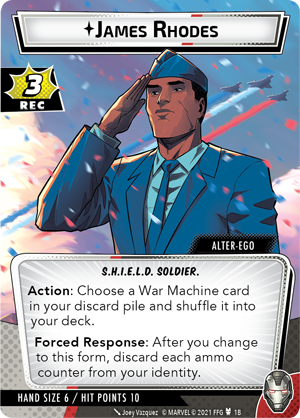 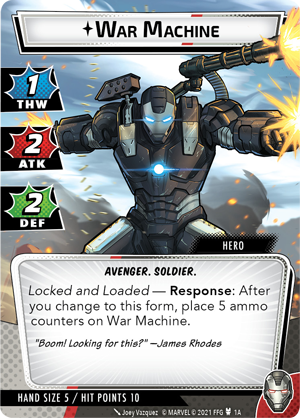 Right when he dons his suit, War Machine (War Machine, 1A) automatically gains 5 ammo counters to work with. If you think you’ll need more, you can always draw from any you stockpiled with your Munitions Bunker (War Machine, 3). Once you’re all loaded up, you can unleash a rapid-fire assault with the suit’s Shoulder Cannon (War Machine, 7), dealing as much damage to the villain as you want, so long as you have enough ammo counters to supply it!

Even if you can’t get your Shoulder Cannon armed, you can still spend ammo counters on some powerful events. Use a Targeted Strike (War Machine, 9) to slow down the villain’s schemes, and clear out the villain’s minions with a devastating Scorched Earth (War Machine, 10). If you need to land one massive, devastating attack, simply go Full Auto (War Machine, 11) to leave your enemy reeling. Then, once you’re out of ammo and need to resupply, switch back to James Rhodes (War Machine, 1B) and use his action to shuffle your events back into your deck! 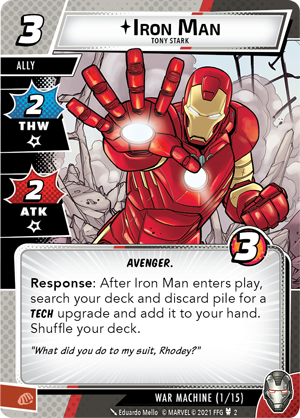 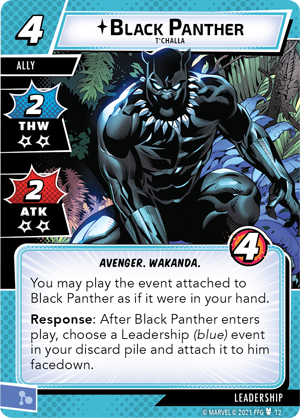 Of course, War Machine is more than just a man in a suit—he’s also a competent leader and skilled tactician, making him a perfect fit for the Leadership aspect. Call on Iron Man (War Machine, 2) to help you suit up and use Black Panther ’s (War Machine, 12) ability to essentially get an extra card in your hand. While an ally like Captain Marvel (War Machine, 13) may be expensive to play, War Machine’s pre-built deck comes with a neat trick to help you get the most out of her: simply use Sneak Attack (War Machine, 17) to put her into play for a fifth of the cost! This lets you use her ability when she enters play to potentially deal 3 damage and possibly stun an enemy, then you can exhaust her to deal an additional 3 damage from her attack. Finally, have Captain Marvel Go Down Swinging (War Machine, 19) to take advantage of her high cost and have her deal another 5 damage on the way out—that’s 11 damage from a single ally, and it only cost you a single resource!