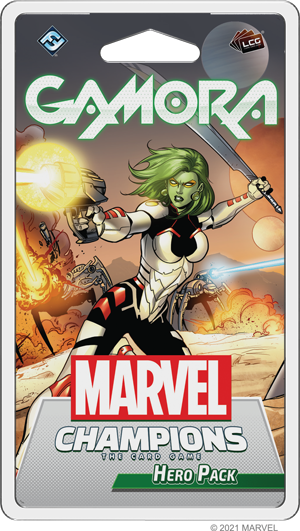 “Thanos built me for one purpose: to kill. He’ll soon realize that was a poor decision.” –Gamora

Trained and tormented from childhood by the mad titan Thanos, Gamora is a deadly warrior able to wield nearly anything as a weapon and dispose of enemies with fatal finesse. No longer under Thanos’ control, Gamora now travels the stars as a member of the Guardians of the Galaxy, and she is determined to end the suffering that she once endured.

As a member of the Guardians of the Galaxy, Gamora dances into the scene with a deadly flurry in this expansion pack, which introduces Gamora as a brand-new playable hero, along with her fifteen signature cards. While she comes packaged with the Aggression aspect, Gamora is unique in that she can have up to six cards from other aspects in her deck as well! With event cards for both Protection and Justice also included in her pre-built deck, you’ll be able to try out her unique tactical flair right off the bat. With incredible combo potential and the ability to both deal damage and thwart schemes reliably, Gamora is a versatile hero and a valuable member of any team. You’ll be happy to have her! 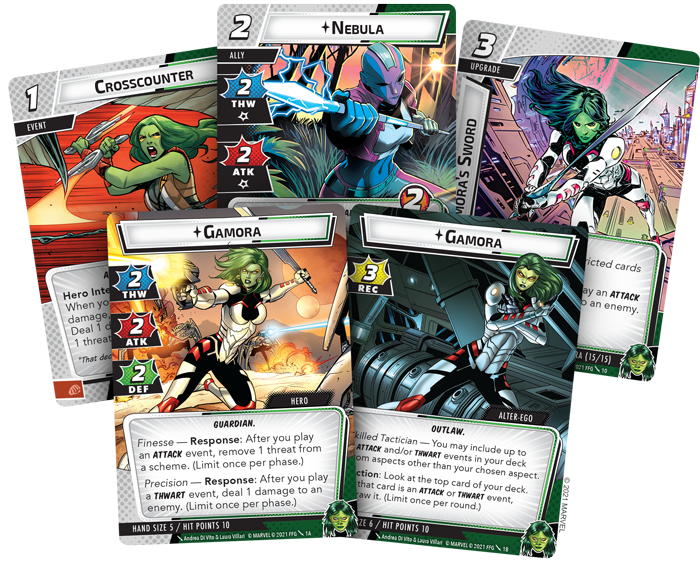 While Gamora’s childhood was anything but happy, she did gain an impressive array of skills from being trained by Thanos. Boasting incredible versatility and the ability to consistently deal damage and remove threat simultaneously, Gamora is sure to have an answer to nearly any situation. 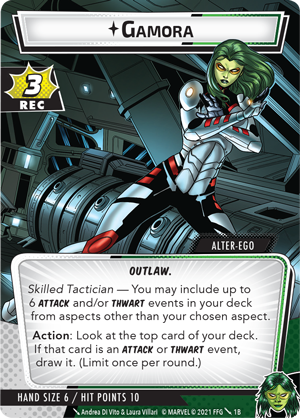 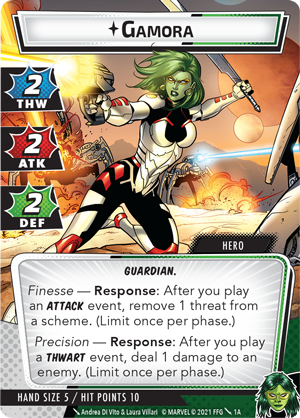 Your arsenal of options begins with Gamora’s alter-ego (Gamora, 1B) ability, Skilled Tactician. By including up to six Attack and/or Thwart cards of other aspects in your deck, you can build a suite of skills to foil the villain’s plans. Use your alter-ego action to pull an extra Attack or Thwart card into your hand, then, when you’re ready, flip to Gamora’s hero form (Gamora, 1A). Unleash a devastating combo of Finesse and Precision to show the villain exactly why Gamora is known as the most dangerous woman in the galaxy!

Use your Keen Instincts (Gamora, 9) to help start your turn with Impede (Gamora, 16), removing 3 threat from the main scheme and triggering Precision to deal 1 damage to an enemy. Assuming Keen Instincts was played on a previous round, Impede will bounce back to your hand after it resolves (since it was your first card played this turn), allowing you to use it to help pay for a powerful Decisive Blow (Gamora, 6). Since you already played a Thwart event this turn, this attack will deal a whopping 7 damage, on top of triggering Finesse to remove 1 more threat from a scheme. This means that with just two cards you dealt 8 damage and removed 4 threat, and you haven’t even used a basic hero power yet. 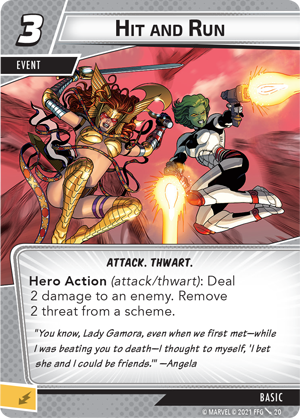 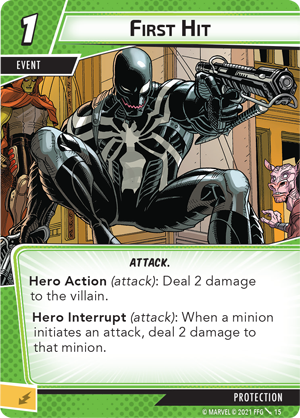 Even if you can’t pull of this specific combo, Gamora still brings plenty of options to the table. Some events, such as Hit and Run (Gamora, 20), count as both an Attack event and a Thwart event, allowing you to trigger both Finesse and Precision with just a single card. Your hero abilities can trigger during the villain phase as well, allowing you to use cards like First Hit (Gamora, 15) or the powerful Crosscounter (Gamora, 4) to stop the villain’s momentum before it can even get started. If you run out of steam, take a moment to come up with a Plan of Attack (Gamora, 13) and start building up a new combo. With so many options at her disposal, Gamora will constantly dish out damage while removing threat from schemes. Is there anything she can’t do? 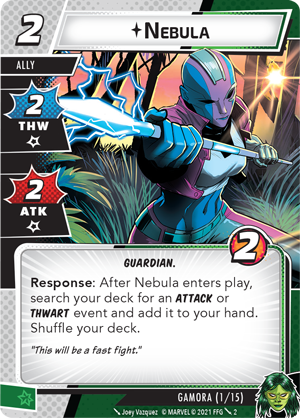 Gamora was not the only person to be “raised” by Thanos. Her surrogate sister, Nebula (Gamora, 2), also joins the fray as an ally in Gamora’s deck. Being able to search for any Attack or Thwart event in your deck makes Nebula a valuable teammate, as she can help you find the right tool for the situation at hand. 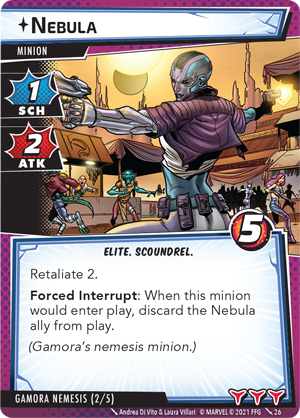 However, be careful not to get too comfortable. Nebula is not a lovey-dovey sister, and an alliance with her is tenuous at best. Sometimes her jealousy of Gamora is simply too much to bear, and she may switch from your ally to your nemesis (Gamora, 26)! Whether Nebula ends up as your friend or your foe, there can be no denying that she will have a profound impact on any game Gamora is in.