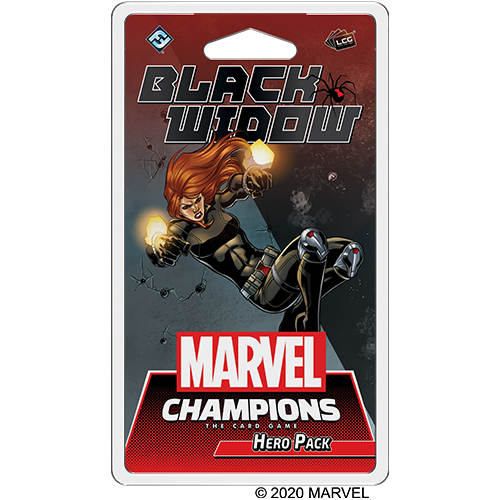 KGB assassin, agent of S.H.I.E.L.D., villain, hero: Natasha Romanoff has taken on many roles, and played many sides in a life shrouded in mystery. But throughout every new stage of life, Natasha has developed a unique set of skills that she now uses in the role of the Black Widow, international super-spy. Soon, you'll be able to make use of these skills as you battle villains from across the Marvel Universe.

The Black Widow Hero Pack includes a pre-built deck for Black Widow utilizing the Justice aspect, the Taskmaster nemesis set, and additional cards to help increase your deck building options! With well-rounded base stats and a Preparation card for every occasion, Black Widow is always ready for what’s coming next! 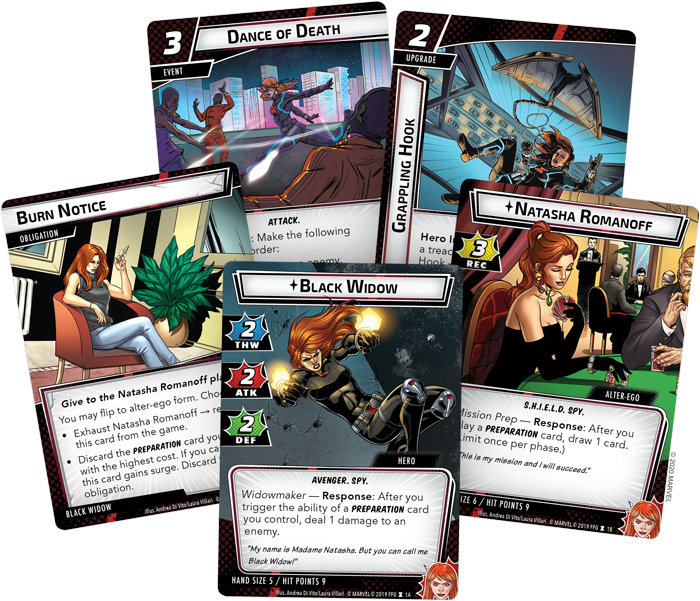 The Dance of Death

As one of the world’s most notorious spies, Black Widow (Black Widow, 1A) is always rewarded for proper planning. Within the Black Widow’s hero cards, you’ll find a variety of Preparation cards. Each of these cards is an upgrade, with an effect that triggers automatically when a specific event occurs. For example, Widow's Bite (Black Widow, 10) won’t do anything when it’s played, but the Widow’s trap will be sprung when her prey appears. While Black Widow is always prepared for enemies, she can also ready a quick escape by playing a Grappling Hook (Black Widow, 8) that can be used to avoid a treacherous situation. Black Widow also has plenty of ways to ensure these Preparation cards are in constant rotation. 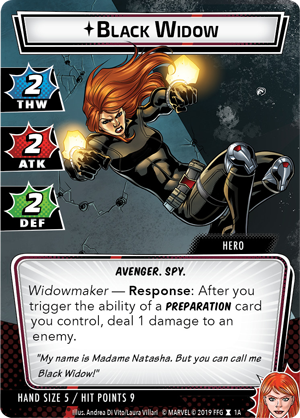 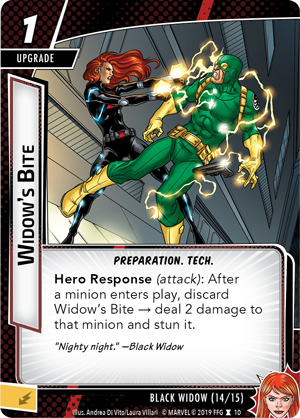 Even if most of these cards can only be used while Black Widow is in her hero form, her alter ego Natasha Romanoff (Black Widow, 1B) is just as vital of a role, keeping your hand stocked as you prepare for upcoming operations, whether it's undertaking Covert Ops (Black Widow, 3) or performing a Dance of Death (Black Widow, 4).

In the Name of Justice

All of Black Widow's espionage actions are undertaken in the name of Justice, so it's fitting that this aspect fills out the rest of her deck! While aspect cards can of course be used in any deck, these new Justice cards synergize particularly well with Black Widow. For example, Agent Coulson (Black Widow, 34) is a solid ally for any hero looking to thwart a villain's plans, but can specifically help Natasha find one of her many Preparation cards. But this doesn’t mean Coulson is useless with other heroes, as several new Justice cards in the Black Widow pack are also Preparation cards! This includes giving you access to Counterintelligence (Black Widow, 17) to outwit the villain’s schemes. 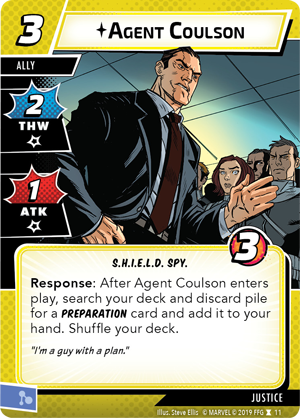 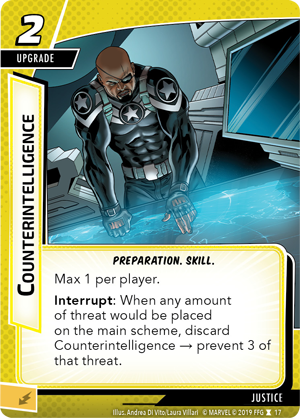 As always, this Hero Pack also includes an additional card for the other three aspects, increasing your deckbuilding options. In this case, each of the other three cards take the form of a Preparation card, providing new ways for Black Widow to be effective in any aspect. For example,  Rapid Response (Black Widow, 31) lets an ally return from the brink of defeat thanks to careful planning. And if your team is under the leadership of Black Widow, you’ll always be prepared for anything!

Like any Marvel hero, Black Widow has her own personal demons to contend with. The life of a spy is dangerous, enemies are around every corner, and even your employers can turn their back on you at a moment's notice. Receiving a Burn Notice (Black Widow, 25) requires all of Black Widow’s attention, as she suddenly finds herself on the run without support, and her best prepared plans can crumble around her. 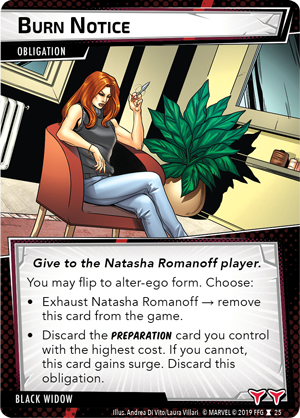 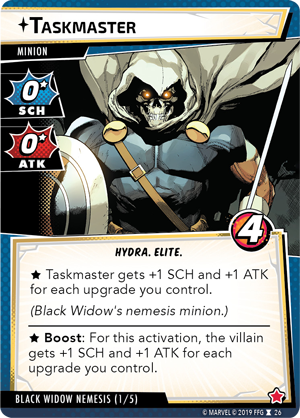 But that’s not all Natasha Romanoff has to worry about. With perfect memory, the insidious Taskmaster (Black Widow, 26) can copy nearly any move he sees, making him one of the deadliest mercenaries in the world. The more prepared you are, the stronger Taskmaster becomes, gaining boosts to his attacks and schemes based on the number of upgrades you control. And even if you defeat Taskmaster, you can never truly be rid of him. He's always hiding in the shadows, working with the main villain and lending them his skills when he is used as a boost card. With the skills of some of the most iconic Marvel heroes, Taskmaster is no easy to foe to overcome, but Black Widow will have to find a way if she hopes to complete her mission.