Game of Thrones: The Blackwater (EN)

Game of Thrones: The Blackwater (EN) 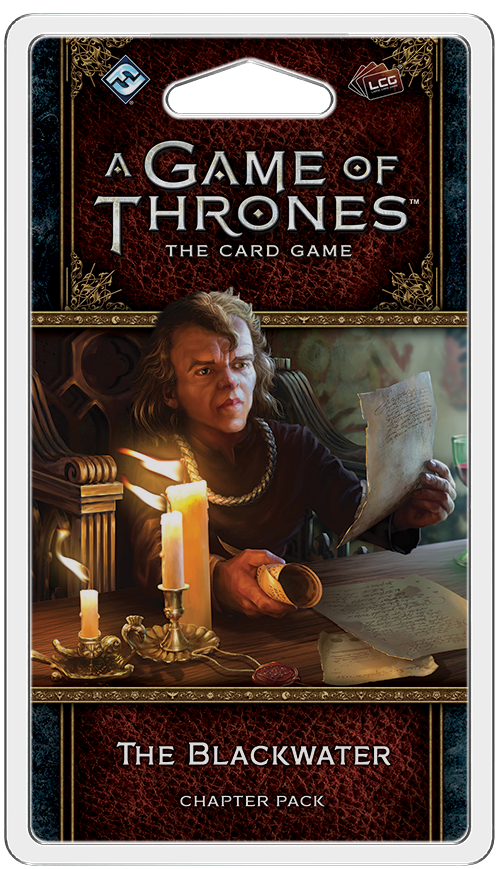 “The hulks have gone up, Y’Grace. The whole Blackwater’s awash with wildfire. A hundred ships burning, maybe more.”
–Ser Osney Kettleback, A Clash of Kings

Journey beyond the walls that protect King’s Landing with The Blackwater Chapter Pack for A Game of Thrones: The Card Game—now available for pre-order at your local retailer or online through our website with free shipping within the continental United States!

In George R. R. Martin’s A Song of Ice and Fire series, the great Houses of Westeros battle for the Iron Throne and control of the Seven Kingdoms. Swords clash on the battlefield, secrets are whispered in the courts, and everywhere is the unending struggle for power and control. Now, you have the chance to leave the page behind and immerse yourself in the world of Westeros with the King’s Landing cycle forA Game of Thrones: The Card Game. Here, key characters and events can brush up against one another without the bounds of the linear time. Rather than moving through the books of the saga, this cycle highlights the capital city that draws people from across the world. As you take your place among its many inhabitants, your loyalties will be tested and you may find that the surest way to earn victory for your House is to turn to less moral means, with the continued exploration of the shadow keyword. But if your actions bring the rightful rulers to power, then surely the ends justify the means. 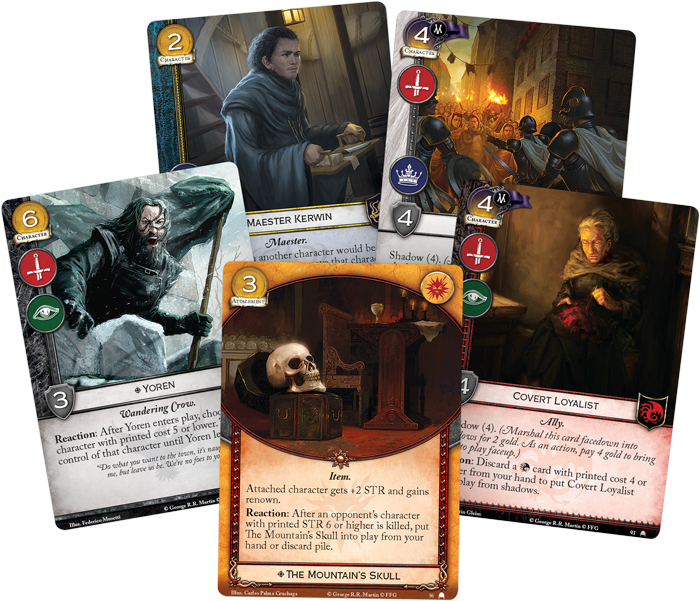 Rising Through the Ranks

The Blackwater served as the setting for the largest battle in the War of the Five Kings. House Lannister ultimately won the battle as ships filled with wildfire were used to incinerate Stannis’s naval forces while a chain cut off any means of escape. With the help of reinforcements led by Lord Tywin, the Baratheons of Dragonstone were forced back, and the city was saved from the invaders. Much of the battle took place on Blackwater Rush (The Blackwater, 88), which now enters the A Game of Thrones LCG as a location for House Baratheon. Once a card comes out of shadows, this location allows its controller to give one power to a Baratheon character. If you are sitting at the precipice of victory, revealing this card directly before any other that waits in shadow will allow you to take your victory without even initiating a challenge. In times of war, a well laid siege can prove just as effective as a blood-soaked battle. 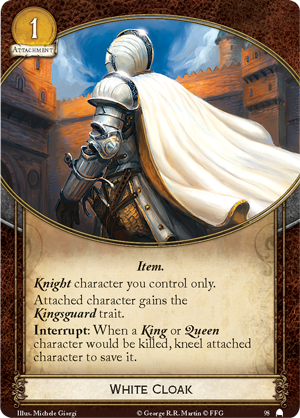 The Battle of the Blackwater was the making of many warriors, earning them titles worthy of their great deeds. In the aftermath, more than 600 men were knighted, raised from obscurity to stand amongst the nobles of King’s Landing. For your own Knights, if you deem one of them worthy, you may gift them a White Cloak (The Blackwater, 98), elevating them to your Kingsguard. This trusted soldier then gains the ability to protect their chosen King or Queen, kneeling to defend their charge when they would otherwise be killed. Or, contrariwise, if you are aligned with the Lions of Casterly Rock you can use this promotion to turn any Knight into aKingslayer (Journey to Oldtown, 30). When honor and duty stand opposed, which side will you choose?

In the Seven Kingdoms, there are those whose duty in to the realm rather than to any despot. Even if you do not side with one of the noble families of Westeros, you will need to conscript others to your cause if you wish to win the Iron Throne. And few have more experience in recruiting than the men of the Night’s Watch. Since his first appearance in the  Core Set (Core Set, 129), Yoren (The Blackwater, 85) has increased in strength and his ability to recruit others to the cause of the Night’s Watch. While he was once only able to bring opponents to his side after they had already been discarded by his enemy, the Wandering Crow can now take control of any character with a printed cost of five or lower once he enters play, maintaining his hold over them as long as he is on the field.

From the War of the Five Kings and beyond, a darkness has descended on Westeros as the long summer comes to an end, and now all must either learn to live in the darkness or perish. With the continued cultivation of the shadow (x) keyword, House Stark, Lannister, and Tyrell each find new events that cut to the heart of their faction’s themes and allow them to stand amongst their rivals who have gained similar events throughout the King’s Landing cycle.Shadow of the North (The Blackwater, 82) increases the deadliness of House Stark’s bannermen for one challenge and, if Winter has come to Westeros, allows them to return the event to their hand rather than discarding it. Meanwhile, Shadow of the Rose (The Blackwater, 84) plays with the theme of control, allowing the Tyrells to search the top ten cards of their deck for a card to put into shadows and return the event to their hand if there is a Summer plot revealed. 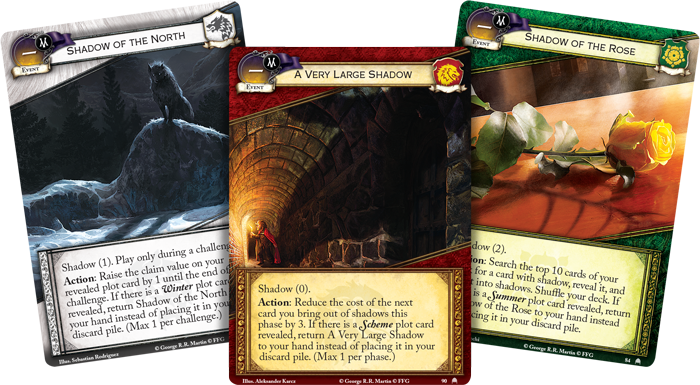 Finally, the Lannisters can ambush their opponent by casting A Very Large Shadow (The Blackwater, 90), which reduces the cost of the next card they bring out of shadows by 3. This can be used to cut the cost of high-profile characters like Cersei Lannister (Daggers in the Dark, 109) or Ser Robert Strong (The Shadow City, 10) in half, or be used to play warriors like Ser Mandon Moore (At the Gates, 9) for free!

But perhaps the Lannister’s greatest asset is the unsung hero of the Battle of the Blackwater, Tyrion Lannister (The Blackwater, 89) who orchestrated the wildfire assault which destroyed Stannis’s forces and saved the lives of countless citizens. Now, if Tyrion is on your Small Council, he can use his keen mind to give the shadow keyword to any of the cards you control whenever you bring a non-event card from shadows. This can allow you to move attachments between characters as the need arises or reuse the abilities of characters like Catspaw (Streets of King’s Landing, 49) that trigger when they come into play from shadows. Tyrion’s cunning mind is sure to prove deadlier than a longsword for any who dare to underestimate him.