Game of Thrones: All Men Are Fools (EN)

Game of Thrones: All Men Are Fools (EN) 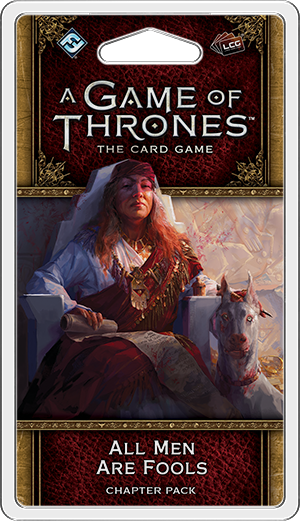 Fantasy Flight Games is proud to announce All Men Are Fools, the first Chapter Pack in the Blood and Gold cycle for A Game of Thrones: The Card Game!

In the aftermath of the Battle of the Blackwater, a moment of peace falls across Westeros as the Great Houses lick their wounds. House Lannister has won a decisive victory and forged a new alliance with House Tyrell—but more important than battles are the schemes hatching in the darkness. In the heart of King’s Landing, Tyrion Lannister plots his return to power, as the Queen of Thorns takes Sansa Stark under her wing. House Bolton and House Frey each prepare to strike devastating blows against the Starks. And in the south, the princes of Dorne plot their revenge against the Lannisters for sins long past. Soon, these schemes may determine the fortunes of every Great House…

All Men Are Fools is the first Chapter Pack of the Blood and Gold cycle, and it sets off the themes that will play out throughout. Following the lead of the previous two cycles, Blood and Gold focuses on the next book of A Song of Ice and Fire, calling on key events and iconic characters from A Storm of Swords. At the same time, you’ll find a new focus placed on one of the game’s most important resources: gold. With a brand-new keyword and powerful recurring events, every faction gains new ways to spend their gold, as well as plenty of new ways to earn it. Managing your gold has been crucial since the days of the Core Set, and soon, every faction will have more gold and more options than ever before. 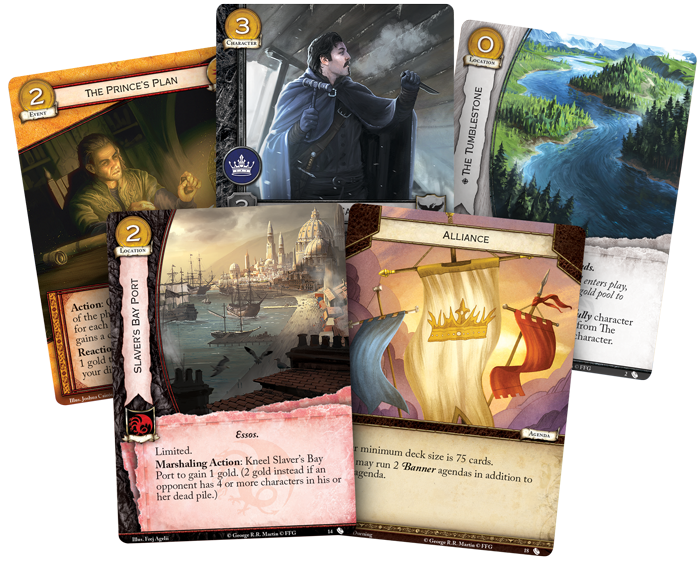 With the onset of the Blood and Gold cycle, a new keyword—the first since the Core Set—enters the game. This keyword is “bestow,” and it gives you a new level of control over your card’s power level. 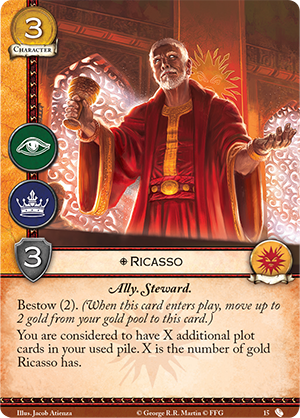 For example, one of the first cards to feature the bestow keyword is the blind seneschal of House Martell, Ricasso (All Men Are Fools, 15). Ricasso costs three gold to play, but he also bears bestow (2), which means that when Ricasso enters play, you may move up to two gold from your gold pool to Ricasso. You’re never forced to move this gold, but once the gold is placed on a character, you cannot spend it and you’ll lose the gold if the character leaves play. Still, as we’ll see in a moment, bestowing gold on the right characters is always beneficial.

Placing gold on a card with bestow has no inherent effect, but the purpose of the gold is defined by the rest of the card’s text. In this case, Ricasso’s ability reads, “You are considered to have X additional plot cards in your used pile. X is the number of gold Ricasso has.” Obviously, bestowing gold on Ricasso has powerful implications for cards like Doran Martell (Core Set, 105), Doran's Game (Core Set, 119), and Starfall Cavalry (Called to Arms, 35), but it’s up to you to decide exactly how much you want to invest in Ricasso.

For the greatest impact, you may choose to bestow two gold on Ricasso—the maximum that you’re able to place on him. Still, doing this costs five gold in total, and you may need to save your money for other effects. Bestowing a single gold on Ricasso gives you a lesser effect for a lower cost, and in desperate circumstances, you could simply play Ricasso for his STR and challenge icons, without worrying about his ability. This precise control over the abilities on your bestow cards is exactly what makes them so adaptable and well-suited to the changing tides of the game of thrones.

By bestowing two gold on Ricasso when he enters play, you are considered to have two additional plots in your used pile!

The other Martell card in this Chapter Pack also plays off of Ricasso, and exemplifies another way you may spend your gold in the Blood and Gold cycle. The Prince's Plan (All Men Are Fools, 16) is an event that lets you choose any character. Until the end of the phase, that character gets one additional STR for each plot in your used pile and it gains a challenge icon of your choice! This event isn’t like most events, however, which remain in your discard pile after being played. At any point after you lose a challenge, you may pay one gold to return The Prince’s Plan from your discard pile to your hand—and this card’s versatility means that even when your opponent knows it’s in your hand, you can use it to push your challenges through again and again. 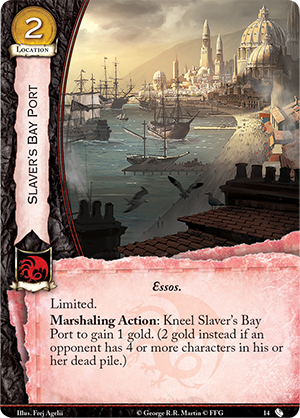 The bestow keyword and recurring events give you plenty of ways to spend your gold… but how are you going to get more? Fortunately, this cycle introduces new economy for every faction, starting with a series of economic locations like the Slaver's Bay Port (All Men Are Fools, 14) for House Targaryen. These non-unique locations cost two gold, and during marshaling, you can typically kneel them to gain two gold—provided the conditions are right. These locations can give you a massive amount of gold, provided you’re playing into your faction’s main themes.

With Slaver’s Bay Port, for instance, you can always kneel the location to receive a single gold, but if your opponent has four or more characters in his dead pile, you receive two gold! With a similar location for every faction and other new economy cards added to your deck, you can gain the gold you need to fuel your deck.