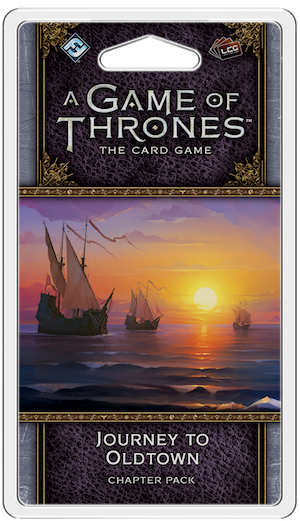 He tried to take his mind off the roiling in his stomach by talking with Gilly as she nursed her son. “This ship will take us as far as Braavos,” he said. “We’ll find another ship to carry us to Oldtown.”
–George R.R. Martin, A Feast for Crows

Fantasy Flight Games is proud to announce Journey to Oldtown, the second Chapter Pack in the Flight of Crows cycle for A Game of Thrones: The Card Game!

Little is certain in the world of A Song of Ice and Fire. Lives are ended with a stroke of steel and mighty strongholds are brought crumbling down into ruin by sieging armies. In such a dangerous and changeable landscape, it seems impossible that something as fragile as a dream could long survive. And yet, a dream—of power, or wealth, or love—may be all that keeps the players of the game of thrones moving forward. Now, you can pursue some of your own dreams with the newest Chapter Pack for A Game of Thrones: The Card Game.

Journey to Oldtown, like The Archmaester’s Key before it, focuses on amplifying the major themes of the game’s fourth cycle. While it continues to follow A Feast for Crows, this cycle brings new strength to the bestow keyword and provides incentives for the factions to forge alliances and band together. Along the way, you’ll encounter a host of iconic characters and locations entering the game, including The House of Black and White, Thoros of Myr, a new version of Arianne Martell, and a lord of House Botley, Tris Botley. 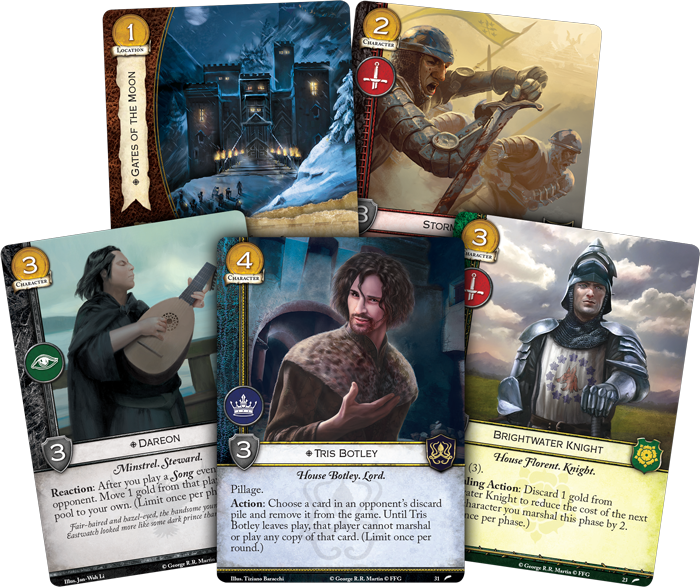 In her journeys and conquests across Essos, Daenerys Targaryen has traveled from the Dothraki Sea, to Qarth, to the great Ghiscari cities of Astapor, Yunkai, and Meereen. Still, none of these places, nor even Westeros, have come close to home for Daenerys. Only a faint memory of her past holds the promise of home—dreams of a house with a red door… 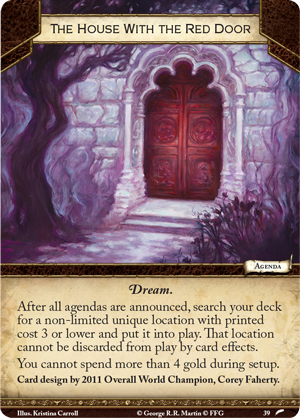 Now, Journey to Oldtown lets you give life to your own dreams of home, opening the gates to an unparalleled number of decks with a single new agenda:  The House with the Red Door (Journey to Oldtown, 39).

The House with the Red Door impacts your game from before you even begin playing—you can search your deck for any non-limited unique location with a cost of three or lower and put it into play after agendas are revealed! Of course, starting the game with a key location in play is an incredible boon, but as an added bonus, the location cannot be discarded from play, keeping it safe from cards like Newly Made Lord (The King’s Peace, 51), We Do Not Sow (Core Set, 83) or Political Disaster (The Road to Winterfell, 40). Still, there’s a price that must be paid for the privilege of starting with this location in play—you cannot spend more than four gold during your setup.

Few agendas can boast the widespread versatility and variability of The House with the Red Door. A deck that starts with The Iron Throne (Core Set, 38) in play looks incredibly different from a deck that starts with Plaza of Punishment (Core Set, 173), Plaza of Pride (Watchers on the Wall, 36), Great Kraken (Core Set, 78), Bitterbridge Encampment (Across the Seven Kingdoms, 5), or White Tree (Across the Seven Kingdoms, 7).

Of course, there are limits to what locations can be selected by The House with the Red Door, but there are still options to support those decks. You can’t start with Harrenhal (For Family Honor, 50) in play, but you could start withTower of the Hand (Wolves of the North, 30). You can’t begin the game with The Wall (Core Set, 137) in play, but you could start with Brandon's Gift (The Road to Winterfell, 26) or Castle Black (Core Set, 136). There are new locations coming out in every Chapter Pack, and every new location matching the agenda’s criteria is potentially a new type of deck using The House with the Red Door. 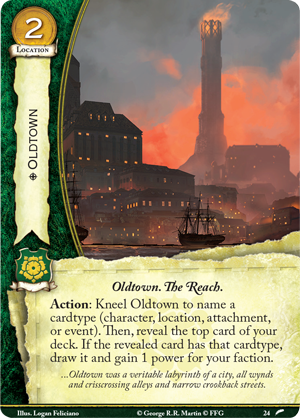 As you might expect, there are locations that work well with The House with the Red Door in Journey to Oldtown, and one is nothing less than the object of your journey— Oldtown (Journey to Oldtown, 24). Oldtown is known as a place of learning—home of the Citadel and the order of maesters. Fittingly, the location itself tests your knowledge: you can kneel Oldtown to name a cardtype and reveal the top card of your deck. If the revealed card matches the cardtype you name, you can immediately draw it and gain one power for your faction!

Of course, you can always guess what the top card of your deck might be, and in most standard decks, guessing “character” would be correct approximately 50% of the time. Still, there are ways to be certain, especially in House Tyrell. Caswell's Keep (There Is My Claim, 64) can be used to determine the top card of your deck, while "The Bear and the Maiden Fair" (Core Set, 197) also gives you precise knowledge of what cards are currently on top of your deck. And, although it means giving up The House with the Red Door, the recently revealed The Conclave (House of Thorns, 45) agenda also works extremely well with Oldtown. After you use The Conclave to place a new card on top of your deck, you simply trigger Oldtown to immediately draw it and gain a power!