Under the command of Jun Sato, the Phoenix Home was the nerve center of the fledgling Rebel fleet. A large Pelta-class frigate, the Phoenix Home typically operated with a crew of 900. Although it was not the largest or more powerful of vessels, it was heavily armored and featured turbolasers and point-defense laser cannons. Moreover, what it lacked in size and firepower, it made up for with its ability to command the fleet and control the battle, playing a crucial role as a coordinator of capital ships and fighter squadrons alike.

As revealed in Star Wars Rebels, the Phoenix Home played a critical part in the formation of the Rebel Alliance, and with the upcoming release of Wave V, you can use the Phoenix Home Expansion Pack and its remarkable vessel to unify and strengthen your Rebel forces. 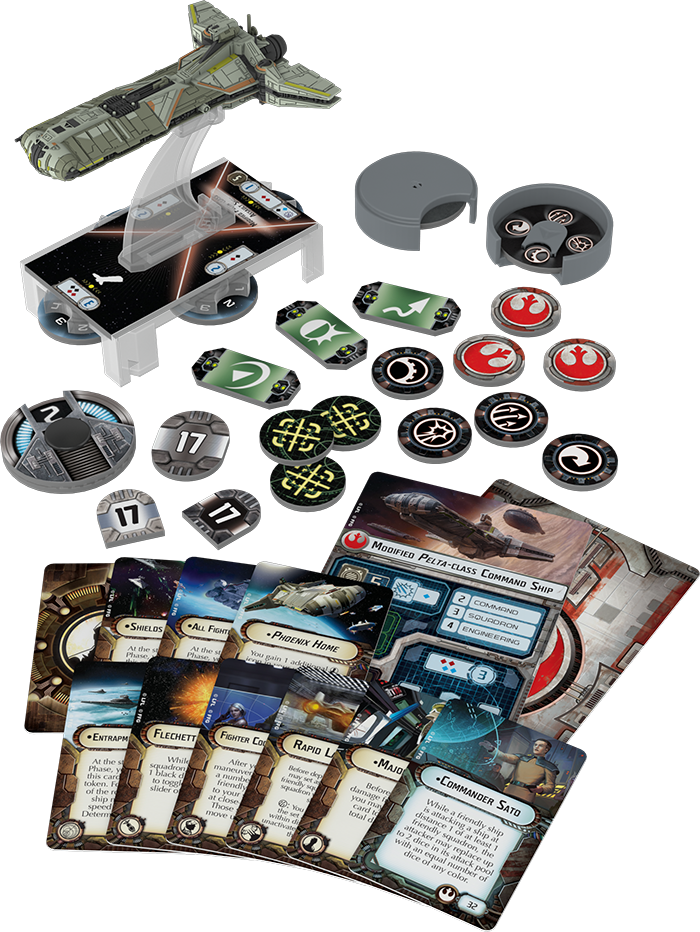 With its forward battery armament of four dice, the Phoenix Home might appear a natural fit for the sort of direct Rebel strategy enabled by the Liberty Expansion Pack from Wave IV. However, the real strength of this vessel lies not in its forward attack dice but in its new Fleet Command upgrade icon. You can only equip one of these upgrades to your Phoenix Home, and all three of the Fleet Command upgrades that come in this pack are unique. Nonetheless, for a handful of fleet points, each of them allows you to spend command tokens to power advantages across every ship or squadron in your fleet!

The Phoenix Home Expansion Pack comes with one pre-painted, small-base miniature Phoenix Home, two ship cards, ten upgrade cards, and all the dials, bases, pegs, and tokens you need to use this ship to lead your growing Rebellion.