“Imperial troops have entered the base!”

There are Rebel scum to be found on any planet in the galaxy—no world is too remote or inhospitable for them. Fortunately, the legions of the Empire are ready to pursue the Rebel Alliance wherever they try to hide. You’ll be able to begin your pursuit soon—Fantasy Flight Games is proud to announce the Snowtroopers Unit Expansion for Star Wars™: Legion!

You can pre-order your copy of the Snowtroopers Unit Expansion at your local retailer or online through our websitetoday!

With the introduction of the Snowtroopers to your Imperial forces, any Galactic Empire commander now has options to consider when choosing the trooper corps that form the backbone of an army. In many ways, the Snowtroopers could be compared to the standard Stormtroopers, and many commanders will choose to have them fighting side-by-side. Both units feature identical upgrade slots, and are armed with standard-issue E-11 blaster rifles. You may even choose to equip your Snowtroopers with Grappling Hooks, enabling them to clamber easily, just like your Stormtroopers.

One difference is that your Snowtroopers may not be as light on their feet as a unit of Stormtroopers, since they’re weighted down by heavy, insulated armor. In fact, Snowtroopers only have a speed of one, using the shortest of Star Wars: Legion’s jointed movement tools to move across the battlefield. Still, this plodding pace gives them a chance to move carefully and deliberately. Snowtroopers boast the Steady ability, letting them make a free ranged attack after they perform a move action. You may commonly see an advancing unit of Snowtroopers that carefully takes aim, moves forward, and fires—all in a single activation. 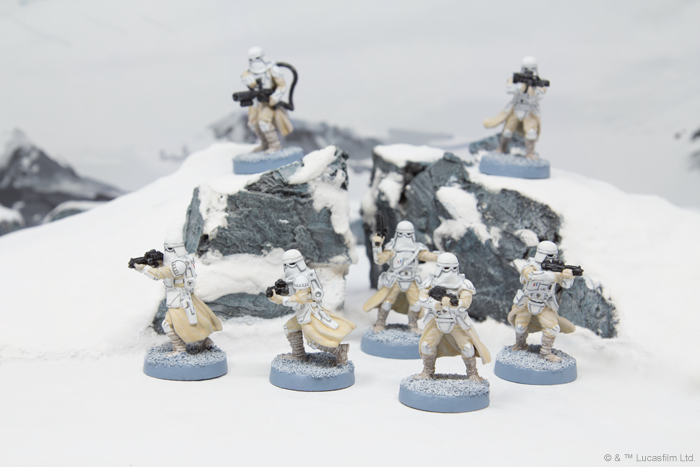 The Snowtrooper heavy weapon upgrades form another point of distinction from standard Stormtroopers. Whereas Stormtroopers are commonly joined by troopers wielding the DLT-19 heavy blaster rifle or an HH-12 rocket launcher, Snowtroopers can specialize at targeting vehicles with the T-7 ion disruptor rifle—or use even more deadly forms of attack against unprotected infantry. After all, on planets known for their freezing cold, not many combatants have adequate protection against flames—a fact that the Empire’s flametroopers, commonly embedded in units of Snowtroopers, are all too eager to take advantage of.

We’ll take a closer look at everything contained in the Snowtroopers Unit Expansion in a future preview! 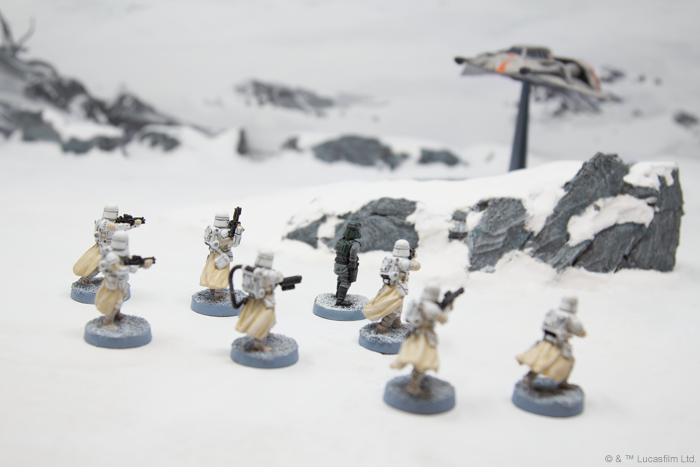