Star Wars™: Legion went on sale yesterday, releasing the Core Set with eight distinct expansions to expand your Empire and the Rebellion forces. Between these unit expansions and the units included in the Core Set, you already have options for building your armies, but there’s even more on the way. Fantasy Flight Games is proud to announce the Han Solo Commander Expansion for Star Wars: Legion!

From his first introduction in a seedy cantina on Tatooine to his unorthodox leadership of the Rebel strike team on Endor, Han Solo is one of the most beloved heroes of the Star Wars saga. Over the years, he’s played a lot of roles: gambler, smuggler, scoundrel, and finally, general of the Rebel Alliance. Soon, you’ll be able to have Han Solo leading your Rebel troopers and vehicles into battle—and he’s got the skills to ensure that you can always shoot first.

Within the Han Solo Commander Expansion, Rebel leaders will find everything they need to add Han Solo as a commander to their Star Wars: Legion armies. A single unpainted, easily assembled miniature features Han Solo with his DL-44 heavy blaster pistol drawn and ready to fire. Three new upgrade cards give you the tools to outfit Han Solo or another unit for battle, and three command cards let you bring Han’s trademark daring and braggadocio to the field. Releasing alongside the Rebel Commandos Unit Expansion, these two expansions let you create your own battles on Endor or any other planet from the Star Wars galaxy.

You can pre-order the Han Solo Commander Expansion and the Rebel Commandos Unit Expansion at your local retailer or online through our webstore today! Then, read on for a closer look at just how fast Han Solo can shoot. 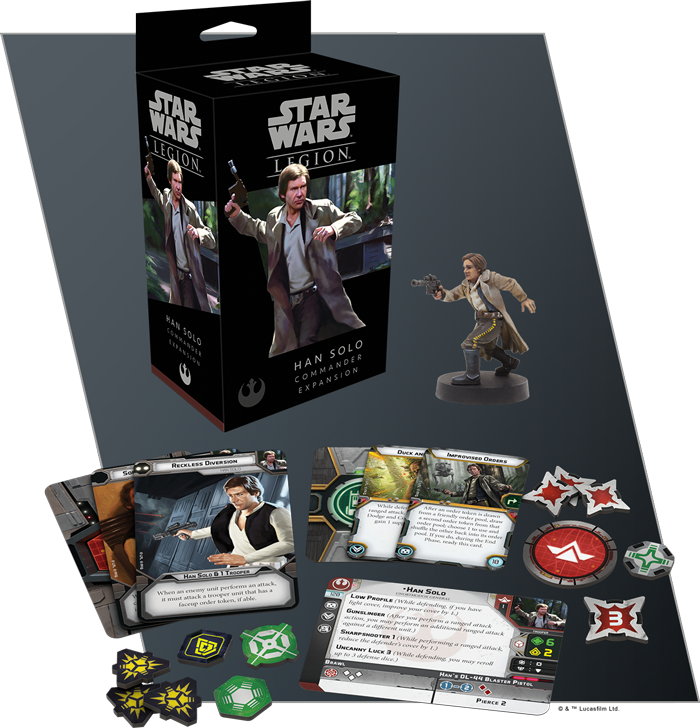 Sorry About the Mess

Han Solo enters the game of Star Wars: Legion as the Rebellion’s third commander, taking his place alongside Luke Skywalker and Leia Organa to round out the trio of heroes from the classic Star Wars trilogy. As we’ve already explored, a Star Wars: Legion army can have up to two commanders, and with the release of Han Solo, you have choices to make if you want two commanders in your army. Whether you pair him with the Force powers and combat prowess of Luke Skywalker or the inspiring leadership of Leia Organa, Han has a bag of tricks for any commander to take advantage of. 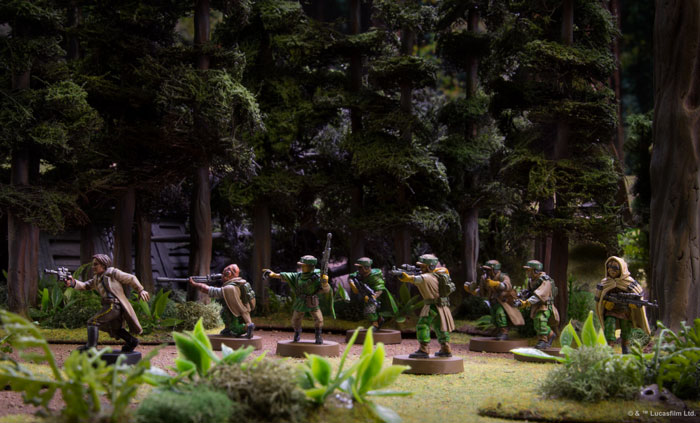 Han Solo wouldn’t be caught on the battlefield without his trusty DL-44 blaster pistol. This blaster pistol can pierce through enemy blocks and when Han Solo’s the one pulling the trigger, it’ll almost always hit his target. Even if your opponent manages to catch Han Solo in melee combat, he’s no slouch in a brawl. Still, Han Solo’s preferred weapon is his blaster, and his abilities make him even more dangerous to your enemies.

For instance, most units in Star Wars: Legion are limited to a single attack per activation—and only the most powerful units have the power to break that limit. Han Solo, as you might expect, is one of those units. Han is already placing his shots hard and accurately with his DL-44 blaster pistol, and his Gunslinger ability rewards you for making these ranged attacks. After you take a ranged attack action with Han Solo, you can immediately perform an additional ranged attack against a different unit! 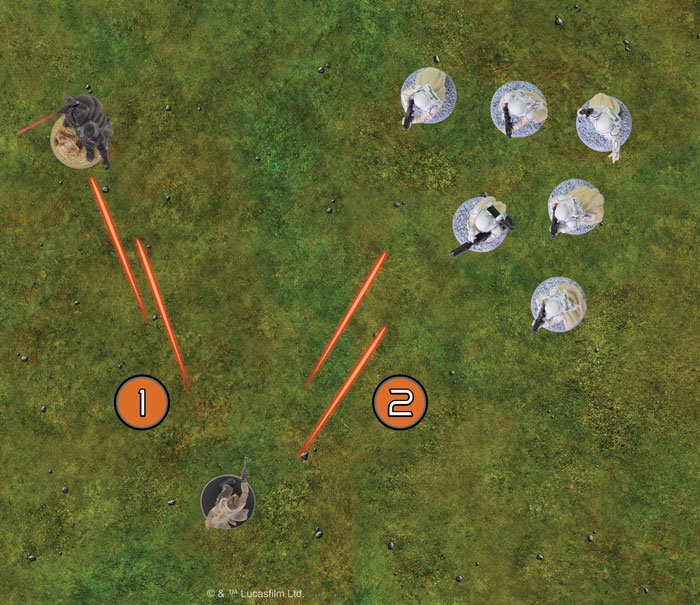 Han Solo’s sharpshooting can certainly help you wherever he stands in the battle, but his three personal command cards give you the power to shape the unfolding conflict with Han’s unique brand of leadership. For example, you might need to guarantee that you have priority for one round of the battle. Sorry About the Mess lets you ensure that Han Solo can always shoot first. Unlike every other command card, Sorry About the Mess has zero pips in its upper-left corner, ensuring that you’ll always win priority. And while it only lets you give an order to Han Solo, he gains an aim token and a dodge token when you issue that order, prepping Han Solo to run or fight—whichever you need!

We’ll take a closer look at Han Solo and all the cards in his expansion in much more detail in a future preview!