"Call up a Hammerhead corvette. I have an idea."
–Admiral Raddus

When the battles of Star Wars™: Armada start getting heated, shields begin to fail, and hulls creak and groan under the strain of repeated battering. It's at times like these that a fleet admiral's cunning may prove the difference between victory and a resounding defeat…

Fantasy Flight Games is proud to announce the sixth wave of Armada expansions!

Light on ships, but heavy on new ideas, Armada Wave VI features two expansions—the Imperial Light Carrier Expansion Pack and the Hammerhead Corvettes Expansion Pack. Inspired by Star Wars Rebels and Rogue One, the expansions give us three new ships—one Quasar Fire-class cruiser-carrier and two Hammerhead corvettes. While these are solid ships, they are by no means the biggest and baddest battleships you'll find in the Star Wars galaxy, but if you overlook the threats they pose? You do so at your peril. 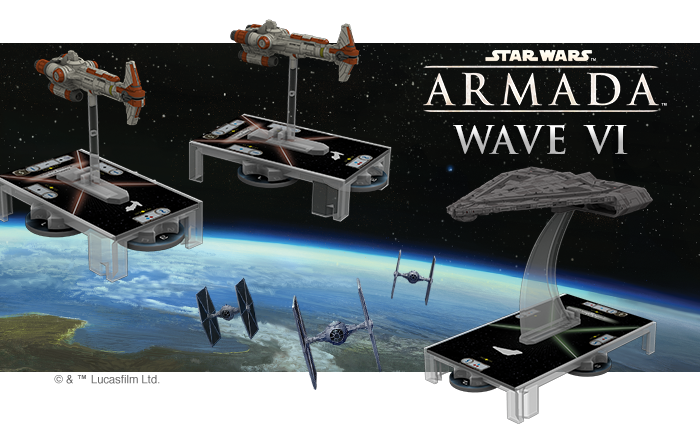 Accompanied by a host of upgrades designed for close-range combats, these ships can punch well above their weight. They can unleash devastating alpha strikes, coordinate their allies, catch their foes unprepared, and strip down their enemies' defenses far faster than you might ever suspect!

Capable of acting as a mobile starfighter base over occupied worlds, the Quasar Fire-class cruiser-carrier is an ideal garrison vessel. It can support operations even in the most primitive conditions, and it bristles with laser turrets that allow it to defend itself while its fighter craft are away on crucial missions.

The Imperial Light Carrier Expansion Pack brings the Quasar Fire-class cruiser-carrier to your tabletop as a pre-painted, medium-base starship with six hull, three dice in its forward battery armament, and a whopping squadron value of "4." 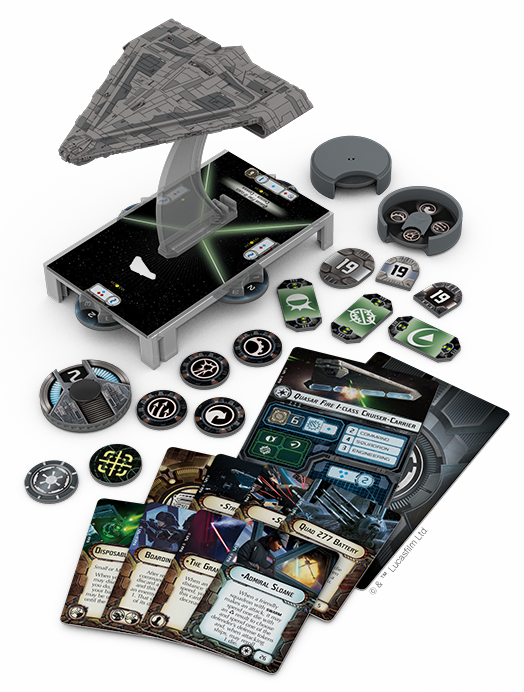 It's supported by two ship cards and a total of ten upgrades that provide a new commander, three Title upgrades, some additional offensive firepower—and the game's first dual-slot upgrade. Requiring and occupying both the Weapons Team and Offensive Retrofit upgrade slots, the Imperial Light Carrier's Boarding Troopers can wreak havoc upon an enemy's defenses, punishing anyone who flies his or her ship too close to the Quasar Fire-class cruiser-carrier that you'd rather keep back behind your fighter screen.