Evil extends its reach and spills into the Streets of Arkham, the newest expansion for Mansions of Madness Second Edition! The city’s façade of normalcy fails as strange happenings begin to infect key places around town. You're likely to find odd circumstances at many areas, including the Miskatonic University, the hidden gang-run speakeasies, and the curious storefronts that populate the once quiet neighborhoods. As an invested citizen with a penchant for noticing when "odd" becomes "too odd," you gather a team of likeminded investigators to examine these supernatural threats. It'll take all of your wits, grit, and the occasional bit of luck to do what needs doing, but somebody has to.

Fantasy Flight Games is excited to announce Streets of Arkham, a new expansion for Mansions of Madness: Second Edition. Three new digital scenarios build upon the Arkham Files universe with yet unseen tiles, mythos events, investigators, and cards to expand upon your investigations.

Ancient supernatural forces have abandoned the confines of the dark mansions and gloomy crypts, and the once peaceful streets now serve as a battleground. A new team of investigators joins the fray as the battle to quell the Ancient Ones spills out into the open. Streets of Arkham unites four new investigators with a wide range of backgrounds, including a rookie cop, a bootlegger, an entertainer, and even a reformed cultist.

Each new investigator comes with their own unique ability to align with the backstory detailed on the back of their character cards. Finn Edwards’s past as a bootlegger has prepared him to be quick as he moves about the shadows, allowing him to move an extra space before or after performing a search action. The reformed cultist, Diana Stanley, has seen more terrors than any other investigator of the Arkham universe. As such, when she would suffer two or more horror, she suffers one fewer horror instead. Officer Tommy Muldoon of Boston always has his trusty rifle, Becky, at his side, which he can use on any test. And last but certainly not least, the enchanting singer Marie Lambeau can use the skills learned from her grand-mere in the bayou to cast a spell without spending an action.

Taking the action outside the confines of the mansion forces investigators to adapt and learn on the fly. After all, the only way to forge a weapon of great power is by hammering it into shape. With Streets of Arkham, players can now strengthen their investigators with new Improvement tokens. When as investigator is instructed to improve one of their six skills, he or she claims an Improvement Token associated with that skill, placing it on his or her play area. This increases the printed value of their corresponding skill by one. A skill cannot be improved more than once, but these boons will benefit the entire investigation in ways previously impossible. 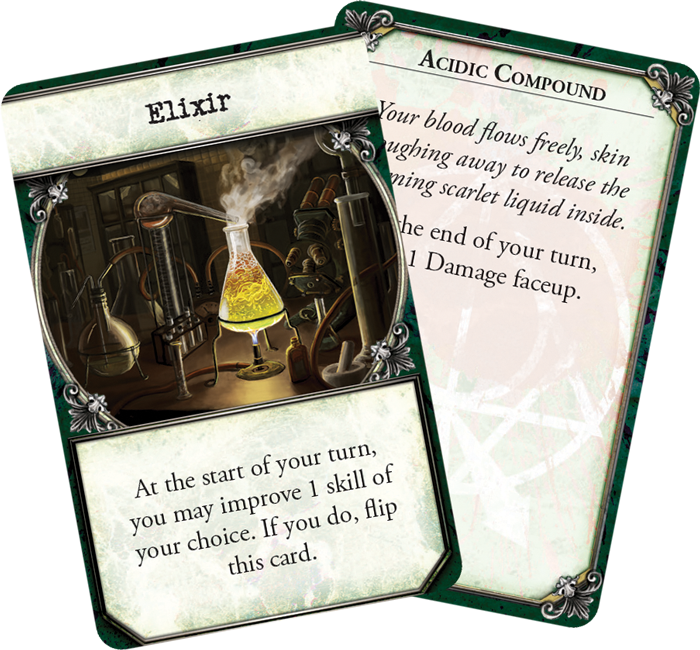 When an investigator first gains an Elixir, they draw it faceup and treat it as an item. As such, they can be dropped, picked up, or traded. However, these tricky elixirs are double sided. If an investigator flips an elixir facedown, they must immediately resolve the effect described on the card, and it is no longer considered an item.

Streets of Arkham comprises of three new adventures with various levels of difficulty that draw investigators across the city. The first of these, Astral Alchemy, leads investigators to Miskatonic University where strange beasts from beyond the stars are stalking the shadowy halls. With help from the academic elite, players may just be able to push the astral abominations back from whence they came. 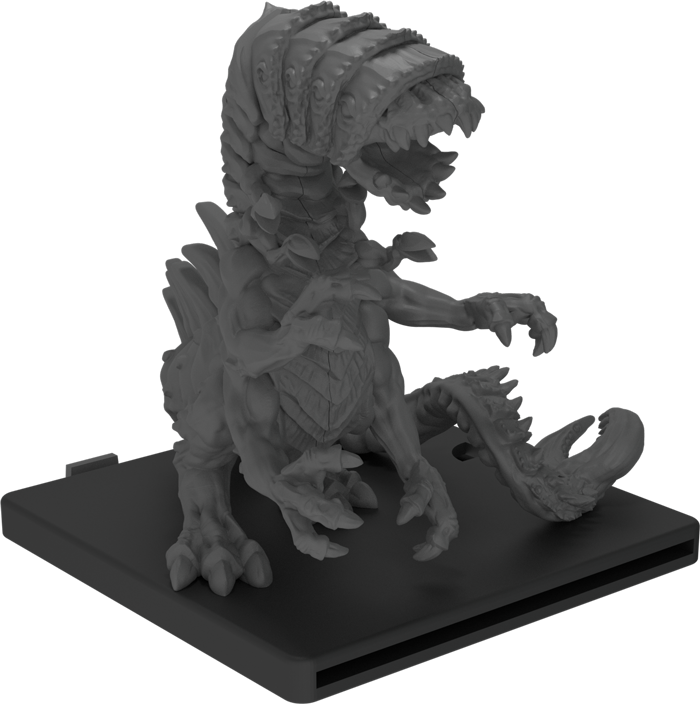 In Gangs of Arkham, investigators must solve an inhuman murder to prevent an all-out war between the Sheldon and O’Bannon gangs. Each gang accuses the other as the culprit, but the real killer may be something more sinister, something unnatural. The stakes are high; if investigators fail, innocent lives can be lost in the crossfire and the true murderer will be free to continue tormenting the citizens of Arkham.

Finally, Ill-Fated Exhibit takes place at the Miskatonic Museum where the opening of a new exhibit featuring several ancient artifacts is marred by a series of impossible accidents. After several deaths, the assistant curator has called in the investigators to determine which artifact is cursed and destroy it before anyone else gets hurt.

Within these perplexing scenarios, Streets of Arkham includes a new digital game to further puzzle the investigators. The tower puzzle consists of three columns with randomized blocks of various sizes stacked atop one another. Players must move the topmost piece of one column to the top of any other. The puzzle is solved when each piece of the puzzle is on the correct position in a single column and the tower is properly displayed with the largest piece on the bottom and the stack descending in block size to the top. 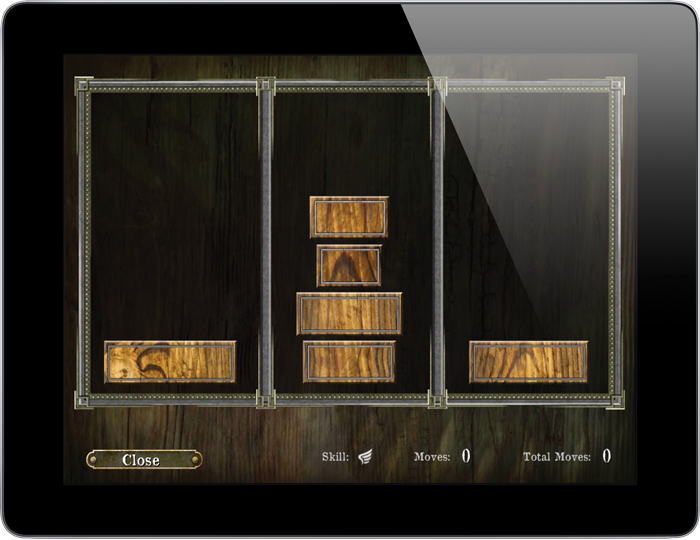