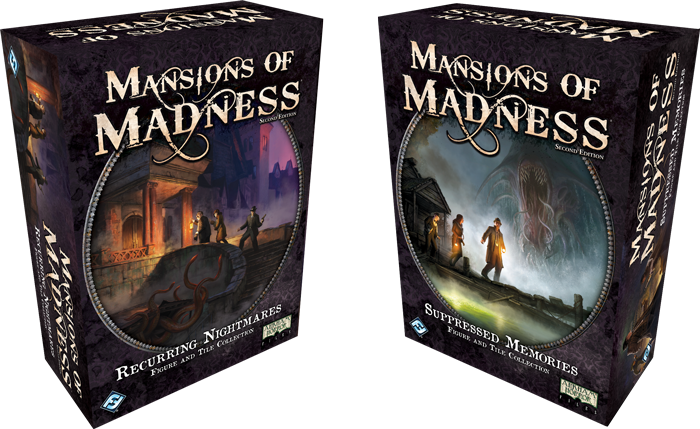 You will your legs to move, but some kind of paralysis holds you to the ground. A massive, slime-covered beast bears down upon you, it’s shimmering eyes popping in and out as if it were made of…nothing? Strange. These monsters… so familiar. You must have had this dream before. You dodge the pursuing Shoggoth, which slams into the ground beside you before rapidly resuming its attack. It throws its protoplasmic form down again as you beg for respite. Awake...AWAKE. The ground shakes beneath you as the creature nearly misses, and the realization strikes that this may not be a dream as you thought…
No. This is a nightmare you will not be waking up from.

Expand your Mansions of Madness Second Edition game this fall with two Figure and Tile Collections and four brand new Arkham Horror premium monster figures. All six of these products will deepen your experience in Arkham, whether by reintroducing First Edition monsters and investigators to your Second Edition game, gaining access to alternate scenario maps, or substituting in detailed, pre-painted miniatures.

The Recurring Nightmares Figure and Tile Collection contains all the monster miniatures, investigator figures, and map tiles from the Mansions of Madness First Edition core game, and Suppressed Memories contains those from theCall of the Wild and Forbidden Alchemy expansions. Combined with the Mansions of Madness Second Edition Conversion Kit, each of these Figure and Tile Collections will give players access to a brand new scenario, which will focus on the monsters and characters from that collection. If you already have the First Edition components, no need to pick up the Collections. You can use your existing pieces to play the new scenarios when they release this fall. 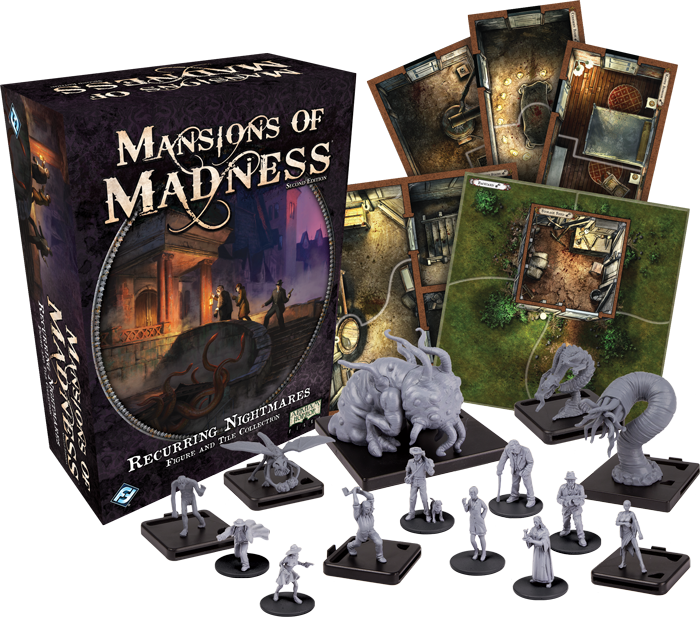 The first of the two Figure and Tile Collections, Recurring Nightmares, includes all eight investigator figures, eighteen plastic monster miniatures, and fifteen double-sided map tiles from the Mansions of Madness First Edition core game. Take on the role “Ashcan” Pete, the drifter, and make use of his loyal hound dog, Duke, or assume the attributes of Harvey Walters, the brilliant professor. With Recurring Nightmares in your collection, you may also encounter a host of long-forgotten monsters, such as the fearsome Chthonian or the unpredictable Maniac.

When you include the First Edition core set or Recurring Nightmares pieces in your game, you will also gain access to a brand new scenario. Tasked with solving the mystery of missing bodies from Hangman’s Hill Cemetery, you and your fellow investigators will need to explore the misty and sinister graveyard. You may find the corpses you seek, dead as they ever were, or perhaps some sinister reanimation of their bodies will find you first. 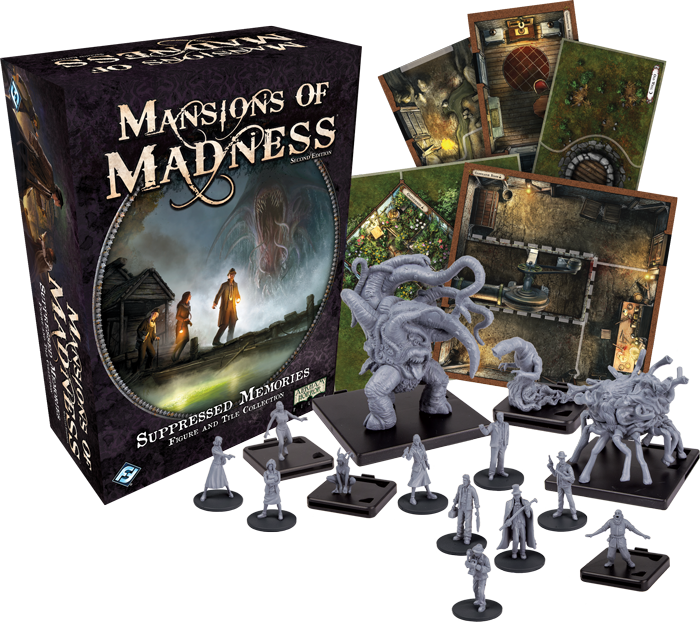 The second Figure and Tile Collection brings pieces to Second Edition from both first edition expansions, Forbidden Alchemy and Call of the Wild. Suppressed Memories includes eight investigators, fifteen plastic monster miniatures, and seventeen double-sided map tiles. You may choose to play as Bob Jenkins, the charismatic salesman from Call of the Wild, or the insightful psychologist Carolyn Fern from Forbidden Alchemy. Consider your investigators carefully, because it will take exceptional strength and will to escape a threatening Byakhee or an unsettling Nightgaunt.

The Suppressed Memories scenario is based on the collection’s Call of the Wild content, meaning those with the original Call of the Wild expansion will be able to play as well. Adding the Forbidden Alchemy expansion as well, however, will increase the number of scenario variants available to you. Fans of the original game may recognize this scenario as a reimagining of a First Edition scenario, featuring the return of Zebulon Whately and an attempt to interrupt a sinister happening in Dunwich. You won’t know exactly when your time is nearly exhausted, though, so tensions are sure to run high as you race to stop your occult enemies from carrying out their task. 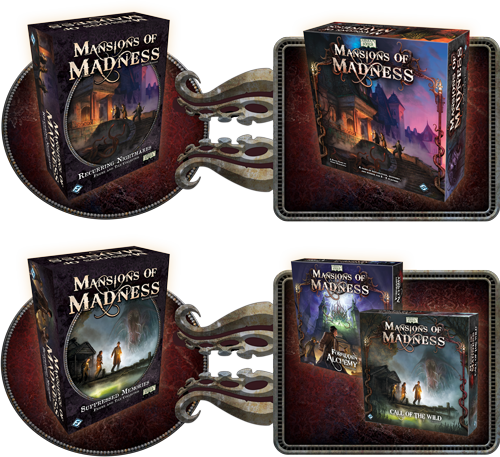 Alongside the Figure and Tile Collections, we bring you the final four Arkham Horror Premium Painted Miniatures. Over the last several years, we have released an extensive collection of pre-painted minis to use with your Arkham Horror, Eldritch Horror, and Mansions of Madness games. The release of these four minis culminates our introduction of these visually stunning figures to your Lovecraftian game worlds.

Incorporate three of these terrifying creatures into Mansions of Madness Second Edition in order to further immerse yourself in the horrifying setting of your game. These figures sit on the same specially designed black base as your existing figures, so you can use the monster tiles that came with your game to bring the menacing monsters to life. From the brutish Deep One Hybrid to the disturbing Priest of Dagon and finally to the terrifying Star Spawn, these intricate miniatures will bring a new sense of horror to your game. Longterm fans of the Arkham Horror files will also want to add the eerie Barnabas Marsh to round out their collection.