Mansions of Madness: Beyond the Threshold (EN)

The frightening creatures of Mansions of Madness Second Edition have haunted your dreams for weeks now. Mysterious disappearances brought you to the Vanderbilt mansion, and your stay in Innsmouth was disturbed by darkness and despair. You've encountered devoted cultists and disgruntled spirits, bound to the mortal world by their evil task. Terror has overcome you and grievous injuries have put your mortality on display. Every choice you've made has led you somewhere, but even the strongest in mind or body will crack eventually.

Even more horror awaits you in Beyond the Threshold, the first expansion to Mansions of Madness Second Edition. Introducing two new investigators, one unfamiliar creature, and a variety of additional components, this expansion will extend the possibilities of your journey through each and every unsettling scenario of uncertainty and anxiety. The new spaces to discover, people to encounter, and cards to experience all come together to bring additional scenarios as well, throwing you into the dim unknown of two new mysteries, each with their own unique additions to the world of Mansions of Madness.

Your pool of investigators with which to enter the game continues to expand with two more brilliant truth-seekers, both completely new to Mansions of Madness. Wilson Richards may appear to be little more than an everyday handyman, but his call to fix larger issues than the plumbing has led him down an unusual path. His blue-collar, day-to-day life has provided him a practical, physical strength which can only be of help in a fight, and he has developed an acute focus through years of detailed work. The more spiritually gifted Akachi Onyele found herself an outsider in childhood, but has since discovered a keen and sacred awareness of the supernatural. Her exceptional knowledge comes from a lifetime of training and study, and her eye for the unusual makes her a great asset to any team of investigators.

It is with these brave truth-seekers that you will face off with both monsters you've met before and the new corrupted Thralls. People who are weak in mind and spirit have a tendency to fall to dark powers, though none quite like the possessed creatures introduced in this expansion. The forces controlling their minds have gained influence over their physical being as well and have disfigured it almost beyond recognition. Thus, the people with whom you speak in one moment may be the monster you must fight to destroy in the next. There is no such thing as trust with these dark powers afoot. 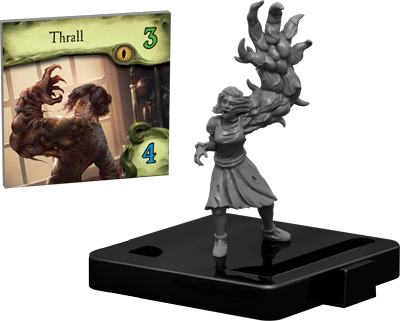 Alongside the new investigators and creatures of Beyond the Threshold are a myriad of new objects, spells, conditions, and afflictions. New weapons lie in wait, offering unique ways to attack, while unfamiliar pains and anxieties threaten you at every turn. You may take control by casting new and powerful spells, or find yourself mesmerized by the chaos of it all. You may find yourself at ease when the monsters and map tiles before you seem familiar, but blended with dozens of new components, you'll never know what to expect... especially when map tiles move and seemingly ordinary objects possess hidden qualities.

The mysteries that lie within the expansion will try your perception of reality, as you try to determine what is real and what lives only in your disoriented mind. When you seek answers, you will come across many red herrings and falsehoods, and you must be able to differentiate between the real and the unreal. Even when you have gained the knowledge you seek, however, you may find that you never wanted to know it in the first place.

The first of two new scenarios introduced in the expansion is The Gates of Silverwood Manor, a trying investigation of disappearances, each with some connection to Silverwood Manor. You've been called in to help by Officer Tetsuo Mori, though what happened before you arrived was never fully explained. After all, how could anyone know about the supernatural events occuring within the manor? The observations you make upon arrival may fail you later, as you return to explored areas only to find unfamiliar spaces.

In Vengeful Impulses, the second of the scenarios, you may experience a similar inconsistency of reality, though as darkness envelops you and your fellow dinner guests, you may begin to question the motivations of those around you. Your host, Thomas Carvey, has suspicions of a malicious plot, and the unsettling events you witness may suggest he is right. Further exploration of his home, however, may lead to greater questions, and intensify your desire to nail down the facts.

Across the haunted and eerie Arkham, your insights and abilities are gaining attention, and people have begun to seek out your assistance. But can you truly help when you encounter never-before-seen creatures and your own mind begins to fail you? Or are your weaknesses more of a hindrance than your strengths are a help? Test your sanity once again as the mysteries that torment the region persist in Beyond the Threshold.

Beyond the Threshold is expected in stores early next year, but the monsters of the mansion are getting restless. Keep your eyes peeled for news on upcoming downloadable scenarios, one of which will be released this winter and playable by owners of Mansions of Madness Second Edition core game.