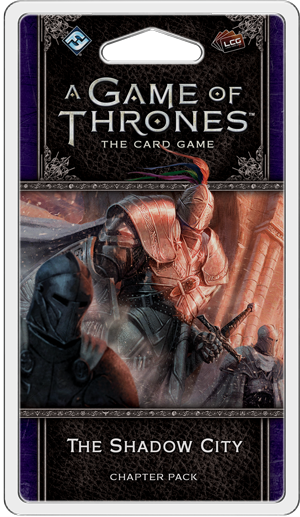 “The strongest trees are rooted in the dark places of the earth. Darkness will be your cloak, your shield, your mother’s milk. Darkness will make you strong.”
–The three-eyed crow, A Dance with Dragons

Fantasy Flight Games is proud to announce The Shadow City, the first Chapter Pack in the Dance of Shadows cycle for A Game of Thrones: The Card Game!

Darkness falls across the world of A Song of Ice and Fire. While Daenerys Targaryen struggles to rule Meereen, conspirators plot her downfall. Jon Snow serves the Night’s Watch as their new Lord Commander, but there are dissidents hidden within his ranks. In the darkling alleys of King’s Landing itself, House Lannister, House Tyrell, and the faith of the Seven clash for control of Westeros. There are shadows everywhere.

The Shadow City marks the beginning of the fifth cycle of Chapter Packs—the Dance of Shadows cycle. Here, you’ll find the story advancing into the pages of A Dance with Dragons and the return of a beloved mechanic from the game’s first edition: shadows. Throughout this expansion and the rest of the cycle, you’ll find characters, locations, attachments, and events emblazoned with the shadow keyword. Assassins, spies, conspirators, and secrets hide in the twilight, ready to spring into view. Every faction must embrace the darkness and the path of shadows—or fade into obscurity.

You can pre-order your copy of this Chapter Pack at your local retailer or online through our webstore today! Then, read on to learn what you might expect to find within The Shadow City. 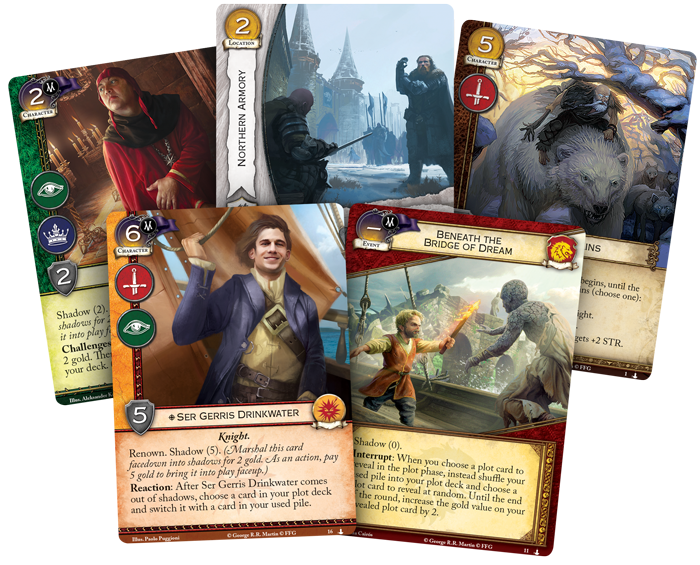 Your battles for the Iron Throne fall into darkness with the advent of the Dance of Shadows cycle and its new keyword, shadow. Before this cycle, most cards in the game were drawn from your deck and remained in one of two spaces: in your hand or in play. The shadow keyword introduces a new place for your most devious, underhanded, and unexpected cards to be played.

Cards that bear the shadow keyword can be played normally by paying their gold cost, or they can be marshaled or setup facedown in the shadows area by paying two gold! Cards in shadows exist in a unique state—separate from your hand and play area and hidden from your opponent’s sight. Though your opponent can see how many cards you have in shadows, he won’t know what they are until you reveal them. Once you’ve played cards into shadows, you can bring them out of shadows as Actions in any phase, at any point during the game. To bring a card out of shadows, you must pay its shadow cost: the number found as part of its shadow keyword.

By paying two gold, you may place Ser Gerris Drinkwater facedown in your shadows area.

In other words, you could marshal or setup Ser Gerris Drinkwater in shadows for two gold. Then, at any point in the game, you could take an Action and pay his shadow cost—five gold—to bring him out of shadows and into play!

And if the inherent benefits of shadows weren’t enough, many shadow cards offer a powerful effect when they come out of shadows! Ser Gerris Drinkwater, to return to our earlier example, lets you choose a card in your plot deck and switch it with a card in your used pile—potentially reusing powerful plots like Valar Morghulis (There Is My Claim, 80) or The First Snow of Winter (No Middle Ground, 79) without cycling through your entire plot deck. If the plot you need is locked in your used pile, Ser Gerris Drinkwater can get you what you need. 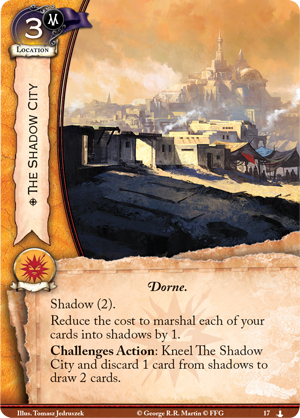 A character like Ser Gerris Drinkwater could be played in a deck without any other shadow cards, simply on the strength of his ability alone. But if you’re trying to build a Martell deck based around shadow cards, you’ll want to enter The Shadow City (The Shadow City, 17). This location can, of course, enter the shadows itself, but its true potency is only apparent while it’s in play. First, The Shadow City reduces the cost to marshal your cards into shadows by one—meaning you’ll only pay a single gold to put a card in shadows. And if that weren’t enough, you can kneel The Shadow City and discard a card from shadows to draw two cards!

By giving you both an economic advantage and a way to reliably draw cards, The Shadow City can serve as the linchpin for a Martell deck dedicated to the shadows. You may even use The House with the Red Door (Journey to Oldtown, 39) to ensure you always start the game with The Shadow City in play. After all, four gold is the perfect amount to setup two cards in shadows.