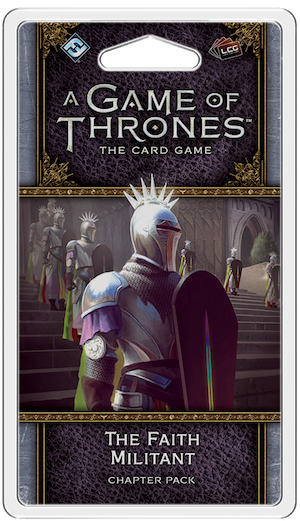 “The Faith Militant reborn… that would be the answer to three hundred years of prayer, Your Grace. The Warrior would lift his shining sword again and cleanse this sinful realm of all its evil.”
–The High Septon, A Feast for Crows

Fantasy Flight Games is proud to announce The Faith Militant, the fifth Chapter Pack in the Flight of Crows cycle for A Game of Thrones: The Card Game!

Throughout the fourth cycle of A Game of Thrones: The Card Game, the separate factions of Westeros have continued to increase their strength. But not all power in the Seven Kingdoms is held by political entities like the Great Houses. Religions hold enormous power in A Song of Ice and Fire, and whether it’s the Old Gods, the Drowned God, R’hllor, or the Seven, they each gain new cards and support in this cycle.

The Faith Militant has a special focus on the religions of Westeros, even when viewed alongside the other Chapter Packs of the Flight of Crows cycle. Here, you’ll find characters who’ve sworn fealty to The Seven, the Drowned God, and R’hllor, each serving their gods with the utmost fervor. With iconic characters like Arya Stark, Daenerys Targaryen, and Coldhands also appearing in this expansion, alongside a new agenda focused on The Seven, it’s plain to see that the Seven Kingdoms will never be the same again.

You can pre-order your copy of The Faith Militant at your local retailer or online through our webstore today; then, read on for more information! 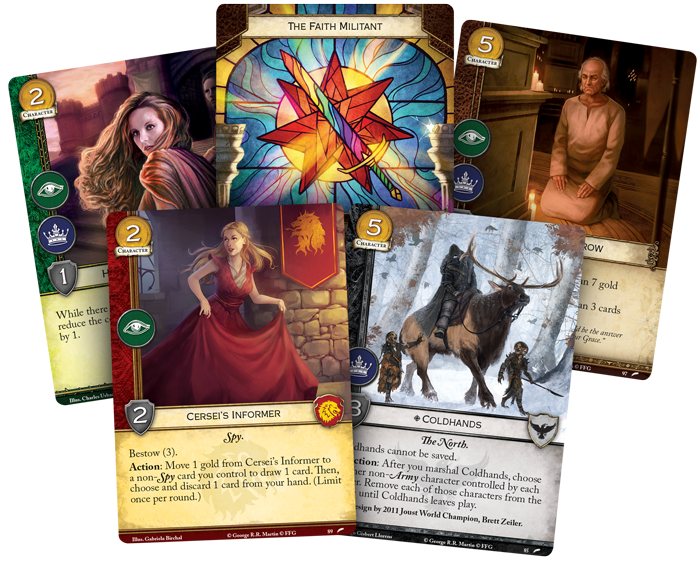 By the time of A Feast for Crows, many gods are growing in power across the realm of Westeros. The long-dormant faith of the Drowned God surges to new life in the Iron Isles under the stewardship of Aeron Damphair. R’hllor’s nightfires have begun to burn across Westeros, as Melisandre or the men of the Brotherhood Without Banners preside over their nightly prayers. Even the Seven—long accepted as the predominant religion for the southern kingdoms—gain new strength with Cersei Lannister’s blessing, as they reform their ancient military orders, the Warrior’s Sons and the Poor Fellows. 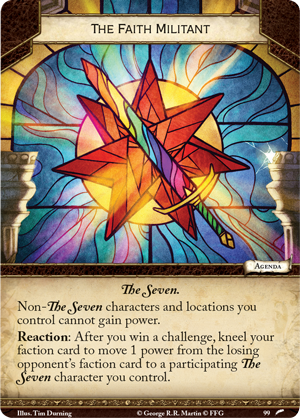 You can reflect this growing strength in your own games of A Game of Thrones: The Card Game with a new agenda that invites you to completely swear your allegiance to The Seven: The Faith Militant(The Faith Militant, 99). The Faith Militant offers you a way to gain power fast—and without forcing you to make at least three challenges, as The Lord of the Crossing (The King’s Peace, 60) does. The Faith Militant reads, “Reaction: After you win a challenge, kneel your faction card to move 1 power from the losing opponent’s faction card to a participating The Seven character you control.” Of course, this additional power comes with the price of absolute loyalty: non-The Seven characters and locations that you control cannot gain power.

It’s easy to see that you’ll want an assortment of The Sevencharacters in a deck using The Faith Militant agenda. While there are neutral options like Begging Brother (Oberyn’s Revenge, 97) orSilent Sisters (Ghosts of Harrenhal, 97), there’s one House that has shown a distinct affinity for The Seven: House Stark. Catelyn Stark (Wolves of the North, 2) is a character who can still gain power, even under the restraints of The Faith Militant—and every power you move onto her with the agenda only increases her STR. A House Tully Septon (Wolves of the North, 15), on the other hand, allows you to use the power that you have gained to fuel your economy and play out more House Tully and The Seven characters. 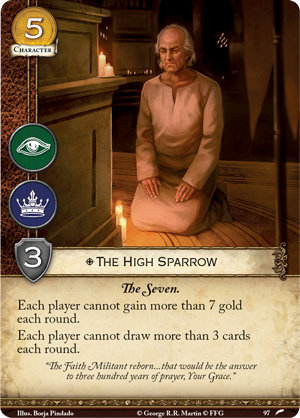 Along with giving your characters another way to gain power with The Faith Militant, you gain another way to race to victory and seize more power with a new Song event, "The Song of the Seven" (The Faith Militant, 98). After you lose dominance, you can play this event to turn that loss to your advantage, snatching two power from the winning opponent’s faction card and moving them to one of your The Seven characters! Not only does this event provide more power that brings you closer to victory, it lets you commit your characters to challenges without worrying too much about the dominance phase. Even when your opponent wins dominance, you can grab that power right back… with interest.

One downside to filling a deck with The Seven characters is that these characters rarely rank among the strongest, most powerful, or most dangerous characters in the game. Still, you may be able to bring a form of equality to your struggles for the Iron Throne with the help of The High Sparrow (The Faith Militant, 97). The High Sparrow’s power in challenges in limited, but he has an unmistakable ability to keep your opponent’s economy in check. While The High Sparrow is in play, no player can gain more than seven gold or draw more than three cards in a single round! With new and powerful economy locations for every faction entering the game throughout the Blood and Gold cycle, The High Sparrow may be just what you need to keep your opponent’s economy in check. Though his restriction affects you as well, it’s easy to build your deck with this in mind, ensuring that seven gold and three cards per round are more than enough to bring you to power.