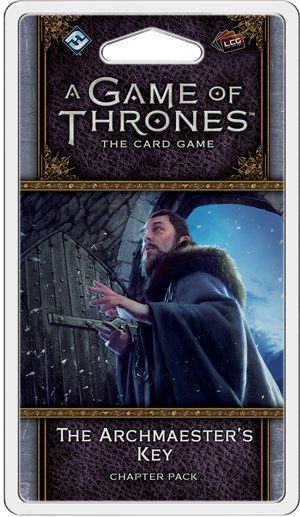 There were stone cups along the rim of the pool. Arya filled one and brought it to him, so he could drink. The young man stared at her for a long moment when she offered it to him. “Valar morghulis,” he said. “Valar dohaeris,” she replied.
–George R.R. Martin, A Feast for Crows

Fantasy Flight Games is proud to announce The Archmaester’s Key, the first Chapter Pack in the Flight of Crows cycle for A Game of Thrones: The Card Game!

The great battles of the War of the Five Kings have ceased with the deaths of Robb Stark, Balon Greyjoy, Renly Baratheon, and Joffrey Baratheon. In King’s Landing, Tommen is hailed as the new king, while Stannis Baratheon and his supporters join the Night’s Watch at the Wall, protecting the realm against the threat from the north. Yet the game of thrones is far from over. Doran Martell sets his plans for vengeance in motion, the ironborn call for a kingsmoot, and Daenerys Targaryen solidifies her control over the city of Meereen. More blood will be spilled, and crows will cover the battlefield before Westeros knows peace.

The Archmaester’s Key is the first expansion of the Flight of Crows cycle, and as such, it serves to introduce the major themes that will play out throughout the cycle. As the name implies, the Flight of Crows cycle broadly follows the narrative of A Feast for Crows, drawing on key characters and events from the fourth book in A Song of Ice and Fire. The bestow keyword gathers strength in this cycle, while other new cards provide incentives for the Great Houses to work together using the Banner agendas. With iconic characters and locations like Daario Naharis, The Iron Bank, The Water Gardens, and Mag the Mighty, The Archmaester’s Key is the perfect way to begin a new cycle for A Game of Thrones: The Card Game! 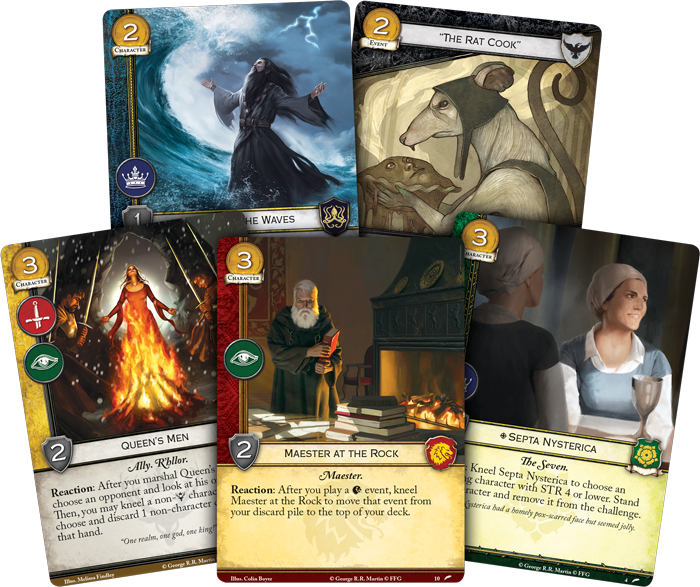 All Men Must Serve

The bestow keyword, first introduced in the Blood and Gold cycle, continues to receive support in The Archmaester’s Key Chapter Pack and the Flight of Crows cycle. Each faction gained new ways to boost their economy in the third cycle, and with the advent of the fourth cycle, you’ll find even more ways to bestow your gold—such as on cards likeAshemark (The Archmaester’s Key, 11). 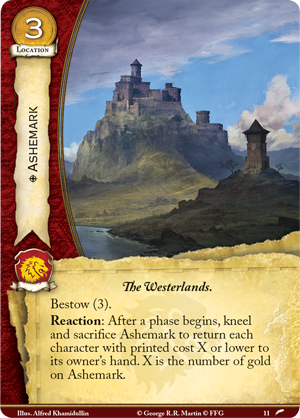 When you play Ashemark, you can bestow up to three gold on it, and in almost every case, you’ll want to spend the full amount. Six gold may be a lot to spend on a location, but the effect is undeniable: if there’s three gold on Ashemark, you can kneel and sacrifice Ashemark after a phase begins to return each character that costs three or less to its owner’s hand. If the effect seems familiar, there’s good reason—Ashemark has much in common with The First Snow of Winter (No Middle Ground, 79).

The First Snow of Winter, however, is limited to one plot in your plot deck—and because you must cycle through your entire plot deck before you can replay a plot, the number of times you can trigger The First Snow of Winter is inherently limited. With Ashemark in your deck, you could easily play The First Snow of Winter, then trigger Ashemark in the subsequent round, stopping your opponent from simply replaying the characters you returned to his hand. And of course, if you have ambush characters like Burned Men (Core Set, 91) or Stone Crows (All Men Are Fools, 9), it’s easy to push through your military challenges and remove more enemy characters—especially if you follow up with Marched to the Wall (Core Set, 15).

While bestow gains momentum in the Flight of Crows cycle, you’ll also find new cards that reward you for bringing factions together in a single deck using the Banner agendas. Just one example is a new Tyrell attachment,Oathkeeper (The Archmaester’s Key, 5). Oathkeeper increases the attached character’s STR, but more importantly, if you win a challenge by five or more STR, you can sacrifice Oathkeeper to search your deck for any non-Tyrell character and add it to your hand! Obviously, grabbing the perfect character for your current situation is an extremely powerful ability. While Oathkeeper may have little to offer to a normal Tyrell deck, if you’re using Banner of the Rose (Core Set, 205B) to bring Oathkeeper into another faction, it could be a powerful tool.

Finally, The Archmaester’s Key heralds the arrival of a new reset plot for the game of thrones. Like the plots that have come before it— Wildfire Assault (Core Set, 26), The First Snow of Winter, and Valar Morghulis (There Is My Claim, 80)— Valar Dohaeris (The Archmaester’s Key, 20) promises to shake up the game. 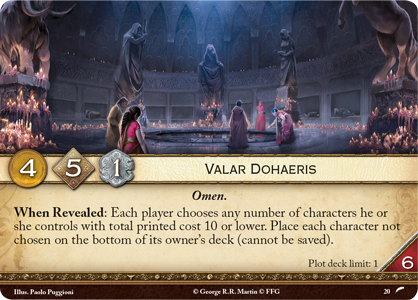 Valar Dohaeris reads, “When Revealed: Each player chooses any number of characters he or she controls with a total printed cost of 10 or lower. Place each character not chosen on the bottom of its owner’s deck (cannot be saved).” While Valar Dohaeris doesn’t offer the permanent solution of killing characters, it does punish your opponent for playing large, high-cost characters—forcing him to significantly reduce his board presence if he wants to keep those characters around. If you’re playing a deck that focuses on low-cost characters and punishes your opponent for investing in powerful characters like Tywin Lannister (Core Set, 90) or Khal Drogo (Core Set, 162), Valar Dohaeris could be the perfect reset plot for your deck.