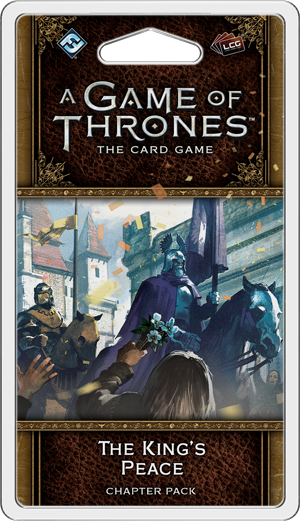 To the other maidens he had given white roses, but the one he plucked for her was red. "Sweet lady,” he said, "no victory is half so beautiful as you.”
–George R.R. Martin,  A Game of Thrones

Knights journey to King’s Landing from across the realm of Westeros, eager to joust in the royal tournament held in honor of Robert’s new Hand, Eddard Stark. For the greatest knights, there is glory and honor to be won, but even at this martial event, the court intriguers see opportunities to cover their tracks and sow confusion. Take your place in the lists or work behind the scenes with The King’s Peace, a new Chapter Pack now available for A Game of Thrones: The Card Game at your local United States retailer and online through our webstore!

You can make your own journey to King’s Landing to participate in the Tourney for the Hand with The King’s Peace. Like the other Chapter Packs of the Westeros cycle, The King’s Peace continues to follow the events of A Game of Thrones, introducing recognizable knights like Ser Rodrik Cassel, Ser Alliser Thorne, and Ser Gregor Clegane. Combined with an innovative new agenda and two new plots—one neutral and one loyal to House Baratheon—this expansion offers exciting new options to every faction. 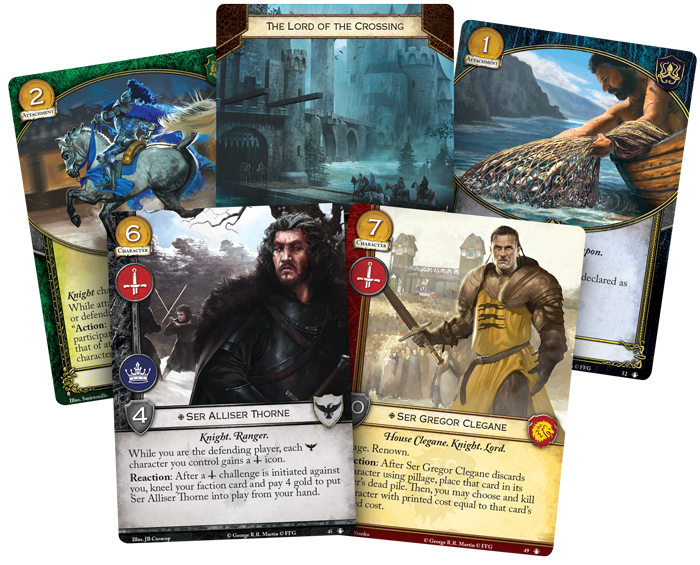 Plenty of decks gain new tools with the release of The King’s Peace, but one deck that gains real teeth allows you the chance to focus on the Knights of Westeros. If you’re interested in rushing to victory faster than ever before, your eye may be caught by the new neutral plot, A Tourney for the King (The King’s Peace, 59). As we explored in this Chapter Pack’s announcement, this plot, combined with the Hedge Knight (The King’s Peace, 57), can quickly increase the power you gain from your challenges—especially if you’re playing a faction that already features plenty ofKnights.

With the release of this expansion, House Tyrell will have one of the highest quantity of Knights, combining the non-unique Arbor Knights  (Taking the Black, 5) and The Knight of Flowers (Core Set, 185) with the Hedge Knights from The King’s Peace. When you add Knighted (The King’s Peace, 58) to the mix, any of your characters can become a Knight, ready to join your challenges and help you claim power for your House. 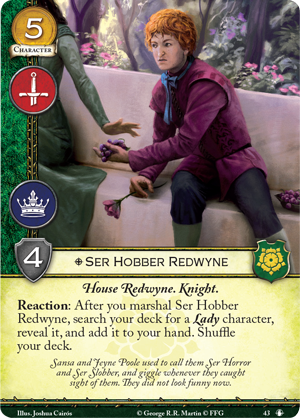 Of course, one of the most powerful power-surge events in the game has already been released for House Tyrell: Lady Sansa's Rose (The Road to Winterfell, 24). This event allows one of yourKnights to gain a power after you win a challenge in which that character attacked or defended alone. If you control a Ladycharacter, however, your Knight gains three power instead! At the moment, House Tyrell only has two Ladies in the game, but in a particularly thematic move, you may choose to ally with House Stark to gain access to powerful Ladies like Arya Stark (Core Set, 141) and Sansa Stark (Core Set, 147).

The new Tyrell cards in The King’s Peace also go a long way towards making your deck even better. Ser Hobber Redwyne (The King’s Peace, 43) is a Knight who allows you to search your deck for anyLady character and add her to your hand after you marshal him, giving you a more consistent way to find your Ladies and gain the full benefit of Lady Sansa’s Rose. As a side benefit, Ser Hobber Redwyne bears the House Redwyne trait, meaning you can boost his STR mid-challenge with the help of an Arbor Knight.

Finally, if your Knights need more help winning challenges alone to trigger Lady Sansa’s Rose, you can use Mare in Heat (The King’s Peace, 44) to make it much more difficult for your opponent. Mare in Heat can be attached to any of your Knight characters, and while that character is attacking or defending alone, you can kneel Mare in Heat to choose a participating character with higher STR than your character and remove that character from the challenge! Your opponent will have to choose if he wants to overcommit his forces and leave his best character knelt to no effect, or if he simply wants to let you win whatever challenges you choose.