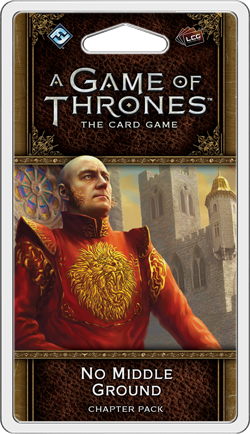 “You should have taken the realm for yourself. It was there for the taking. Jaime told me how you found him on the Iron Throne the day King's Landing fell, and made him yield it up. That was your moment. All you needed to do was climb those steps, and sit. Such a sad mistake.”
–George R.R. Martin, A Game of Thrones

Fantasy Flight Games is proud to announce No Middle Ground, the fourth Chapter Pack in the Westeros cycle for A Game of Thrones: The Card Game!

In the aftermath of the Tourney for the Hand, Eddard Stark searches for answers to the questions that caused Jon Arryn’s death. Across the Narrow Sea, Daenerys Targaryen rides across the Dothraki sea to Vaes Dothrak with a massive khalasar and her husband, Khal Drogo. The Great Houses stir restlessly across Westeros, watching and plotting their own bids for power. From the sands of Dorne to the icy forests beyond the Wall, tension grows with every passing day.

Enter the unrest and intrigue of A Game of Thrones with No Middle Ground, the fourth Chapter Pack in the Westeroscycle! Like the other packs of this cycle, No Middle Ground follows the events of the first book in A Song of Ice and Fire, introducing iconic characters like Hodor and Gendry to the game for the first time. In addition, you’ll find five new plots in this Chapter Pack—three faction-specific and two neutral—that vastly increase your options for building any faction’s plot deck. 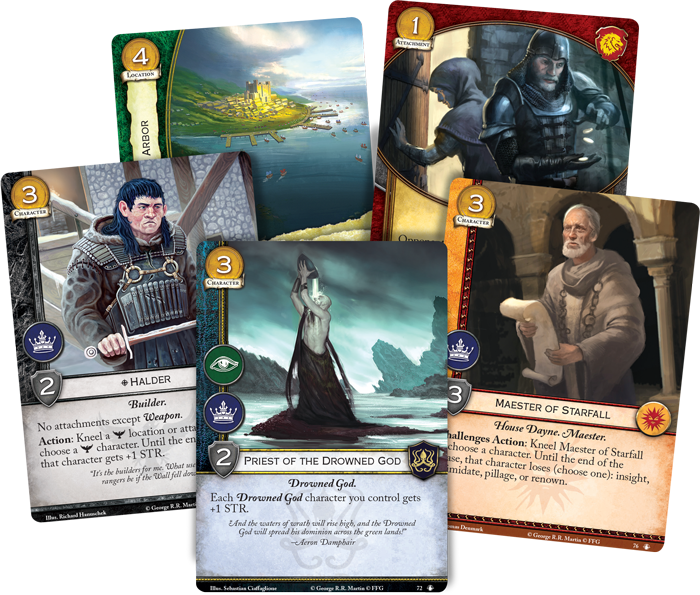 As new intrigues fester in the alleys and courts of King’s Landing, the men and women of the Iron Isles return to the old ways. The ironborn never embraced the faith of the Seven that is followed throughout Westeros, and now, you can bring the blessing of the Drowned God to your own decks with the Priest of the Drowned God (No Middle Ground, 72). 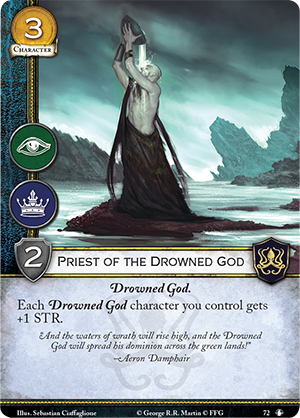 Once your devotion to the Drowned God is at its height, you’re free to raid the helpless, weakened inhabitants of the green lands to the east. You can play Loot (No Middle Ground, 73) to pay the iron price and take your rightful spoils after you win any unopposed challenge. When you play Loot, you can discard a number of cards from your opponent’s deck equal to the cost that you paid for the event. Most importantly, however, you can only use gold from your opponent’s gold pool to pay the cost of this event! By playing Loot, you essentially strip your opponent of gold, removing his ability to play many events, and discard cards from the top of his deck, potentially providing more potent locations for Euron Crow's Eye (Core Set, 69) to steal.

The Threat of Winter

As House Greyjoy returns to the Drowned God and the old ways of its past, chill winds blow across Westeros. Winter approaches and those too weak to withstand the cold will freeze.

In your games of A Game of Thrones: The Card Game, you can use winter’s cold to your advantage with The First Snow of Winter (No Middle Ground, 79). This powerful plot, inspired by a champion-designed card in the first edition of A Game of Thrones: The Card Game, returns every character with a cost of three or lower to its owner’s hand at the beginning of the challenges phase, which gives you a useful way to destroy a swarm of cheap characters or re-center the game on your high-cost characters. Although The First Snow of Winter hits your own characters as well as your opponent’s, you can gain some unexpected advantages: for instance, you may use The First Snow of Winter to “reset” Ser Jorah Mormont (Core Set, 165), returning him to hand only to play him again. 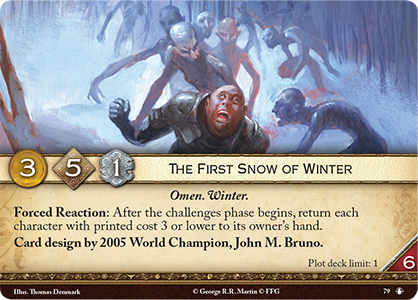 If your opponent is holding powerful characters in hand for fear of Wildfire Assault (Core Set, 26), or if you’re just trying to destroy your opponent’s hand as fast as possible, you may get some benefit from Wraiths in Their Midst(No Middle Ground, 80). This plot reduces the reserve on each opponent’s revealed plot card by two, potentially forcing them to discard cards that they had wished to keep. What’s more, Wraiths in Their Midst can tempt your opponent to overextend and play more characters than he otherwise would have, giving you the chance to follow up with Wildfire Assault or The First Snow of Winter.