“The Red God has his due, sweet girl, and only death may pay for life. This girl took three that were his. This girl must give three in their places. Speak the names, and a man will do the rest.”
–George R.R. Martin, A Clash of Kings

Fantasy Flight Games is proud to announce Ghosts of Harrenhal, the fifth Chapter Pack in the War of Five Kings cycle for A Game of Thrones: The Card Game!

The War of the Five Kings has utterly reshaped the face of the Seven Kingdoms. Though Joffrey still sits enthroned in King’s Landing, Stannis Baratheon is quickly approaching by land and by sea. Renly Baratheon has been assassinated, leaving the might of Highgarden temporarily leaderless. And in the Riverlands, the cursed and twisted stronghold of Harrenhal has passed back and forth between House Stark and House Lannister. Many have died within its walls. More will die before the war ends.

Now, you can enter your own name in contention for this sprawling castle with Ghosts of Harrenhal. As the War of the Five Kings has touched every corner of Westeros, you’ll find plenty of new cards in this expansion that interact with the King trait, while other cards help you counter the drastic bloodshed of Valar Morghulis (There Is My Claim, 80). Finally, you’ll encounter plenty of iconic characters in this Chapter Pack, including Roose Bolton, Brienne of Tarth, Craster, Ser Davos Seaworth, Joffrey Baratheon, and Myrcella Baratheon. 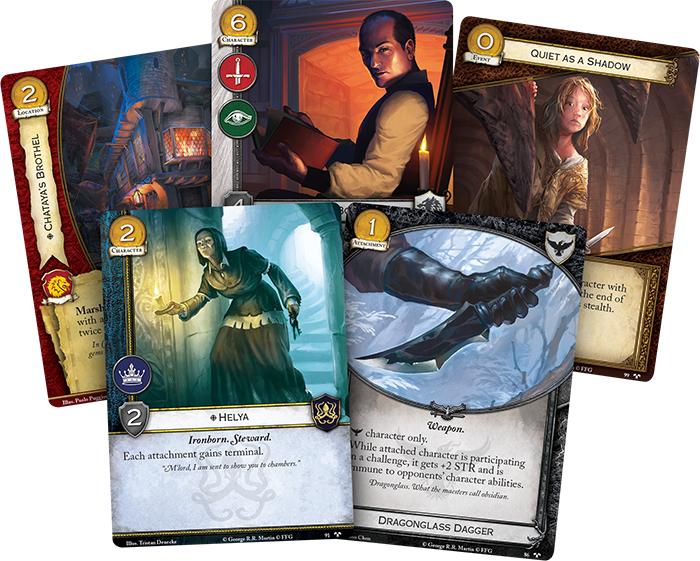 The Tower of Dread

Though Harrenhal has a dark reputation in the world of Westeros, there are few men better suited to hold it thanRoose Bolton (Ghosts of Harrenhal, 81). The Lord of House Bolton is a cunning and unnerving man and although he has pledged his loyalty to Robb Stark in A Clash of Kings, the support of House Bolton has already proven to be a dangerous blessing.

In A Game of Thrones: The Card Game, Roose Bolton takes his place among the most deadly characters in the game. His ability reads: “Reaction: After you win a challenge in which Roose Bolton is attacking, choose up to X total STR worth of characters controlled by the losing opponent. X is Roose Bolton’s STR. Sacrifice Roose Bolton to kill each of those characters.” 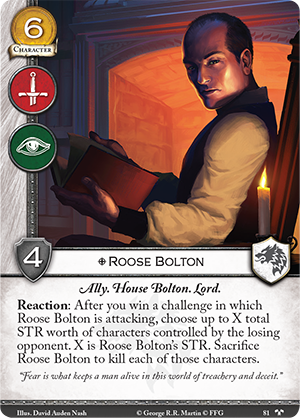 Killing your opponent’s characters is important no matter where you find it, but it’s the versatility of Roose Bolton’s ability that sets him apart. You may sacrifice him to kill a single larger character, such as Melisandre (Core Set, 47), or you may use him to clear out your opponent’s low-STR characters, leaving larger characters vulnerable to military claim. And of course, the more you pump Roose Bolton’s STR, the more dangerous he becomes. House Stark has plenty of ways to increase Roose’s STR, including Winterfell Castle (The Road to Winterfell, 22), For the North! (Core Set, 157), andWinterfell (Wolves of the North, 17). You may even use Needle(Wolves of the North, 20) to increase Roose Bolton’s STR and return him to you hand after you sacrifice him!

Though Roose Bolton is known to be a man with blood on his hands, his murderous potential still cannot match the stronghold he currently rules. Some say that Harrenhal has seen more horror in its three hundred years than Casterly Rock has witnessed in three thousand, and with the Stark version of Harrenhal (Ghosts of Harrenhal, 82), you find the truth in these legends.

Harrenhal is a non-loyal Stark location that costs four gold to play, taking its place among the most expensive locations in the game. Still, its effect is more than dangerous enough to justify the cost. After any character enters play, you can kneel your faction card and sacrifice Harrenhal to immediately kill that character!

In many cases, the threat of activating Harrenhal will do more than the actual effect. Similar to Ghaston Grey (Core Set, 116), your opponent must choose whether he will work around Harrenhal, leaving his best characters in his hand, or if he will simply throw a large character into this cursed fortress, allowing you to kill it immediately. Regardless of how he chooses to play, you can be sure that there’s no correct response to the horrors of a location like Harrenhal.