Game of Thrones: Favor of the Old Gods (EN)

Game of Thrones: Favor of the Old Gods (EN) 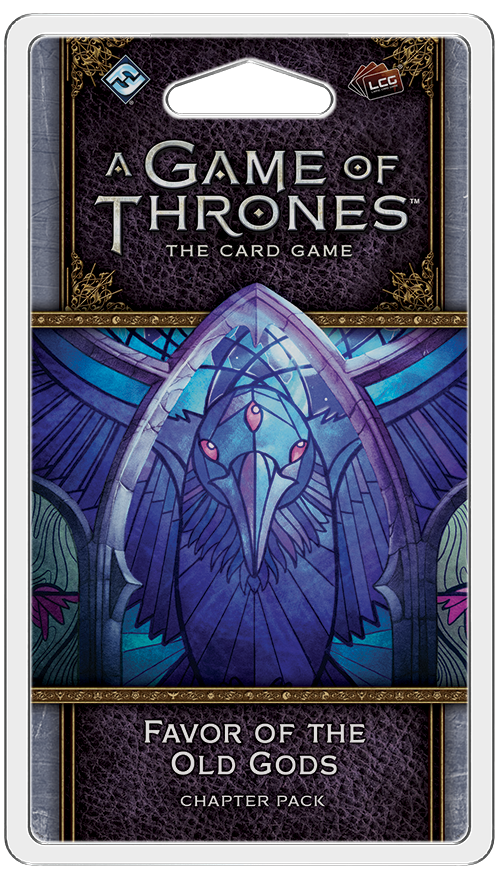 The old gods are dead, she told herself, with Mother and Father and Robb and Bran and Rickon, all dead.
–George R.R. Martin, A Feast for Crows

Fantasy Flight Games is proud to announce Favor of the Old Gods, the fourth Chapter Pack in the Flight of Crows cycle for A Game of Thrones: The Card Game!

The world of Westeros has been defined and shaped by religion. For much of the south, the faith of the Seven is professed—but in the north, the Old Gods still hold sway. The ironborn worship the Drowned God, and the fires of R’hllor are spreading from Essos across the Narrow Sea. Whether held devoutly or used as a pretense for power, these religions have a profound effect on the game of thrones and those who play it.

In Favor of the Old Gods, you’ll find the continuation of the Flight of Crows cycle—drawing players deeper into the events of A Feast for Crows with cards that feature the bestow keyword or reward you for forging alliances between factions. This pack also features an assortment of cards with traits such as Old Gods, The Seven, or R’hllor, hearkening to the many religions that have played their roles in the tumultuous game of thrones. From a new agenda evoking the mystical powers of the greenseers to characters like Selyse Baratheon and Ser Balon Swann, this Chapter Pack has plenty to offer for every faction.

You can pre-order Favor of the Old Gods at your local retailer or online through our website today! Then, read on for more information. 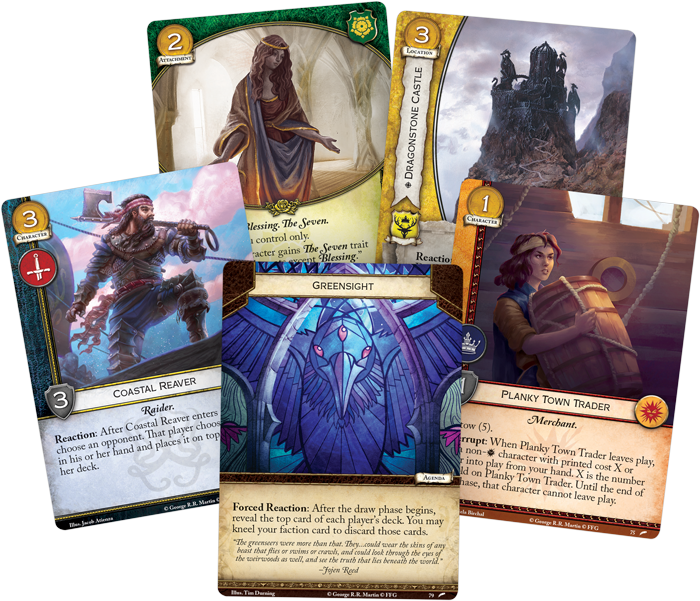 Power of the Red God

From the days of the Core Set, the adherents of R’hllor have been bound to House Baratheon. Only recently, with the release of Beric Dondarrion (The Brotherhood Without Banners, 117), has there been any option for including R’hllorcards outside of the Baratheon faction. In the game, R’hllor cards often play into two distinct strategies, aptly illustrated by the two versions of Melisandre.

Some R’hllor cards, such as Melisandre (Core Set, 47) focus on kneeling your opponent’s figures and controlling the game in that way. Other R’hllor cards, like Melisandre (Guarding the Realm, 27) can give you some insight into your opponent’s hand of cards, exposing his secret plans and discarding cards of your choice. In Favor of the Old Gods, you’ll find two new Baratheon cards that play directly into the faction’s kneeling strategy—forcing all opponents to bow to their rightful king. 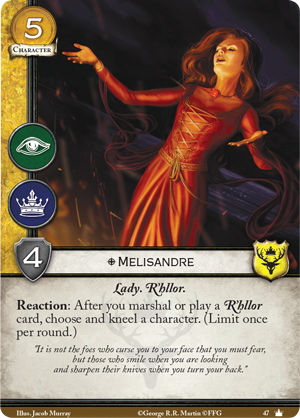 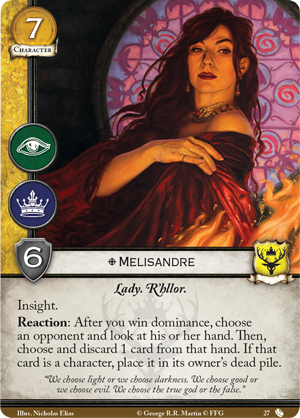 Of course, you’ll be kneeling many of your own characters as well, but the power that Selyse Baratheon offers is more than worth it. You may even combine her with Stannis Baratheon (Core Set, 52), to ensure that your opponent can only stand a couple of his knelt characters. 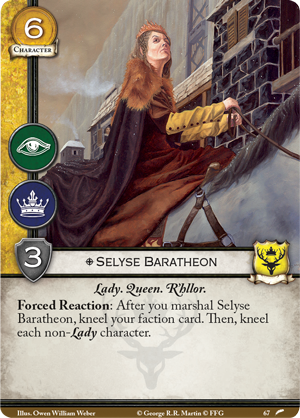 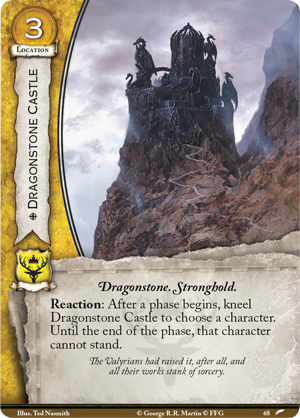 The downside of kneeling your opponent's characters is that it’s only a temporary solution in most cases. Every character stands in the standing phase near the end of the round, and your opponent can even negate your efforts sooner by using cards that stand characters. With effects like Plaza of Pride (Watchers on the Wall, 36) readily available, it’s important to have ways to make your kneel effects more permanent, such as the Core Set version of Stannis Baratheon. In Favor of the Old Gods, you’ll find another tool with Dragonstone Castle (Favor of the Old Gods, 68).

Dragonstone Castle can be knelt after any phase begins to choose a character—until the end of the phase, that character cannot stand. The ways you can apply Dragonstone Castle to your games are nearly limitless. You may use it in challenges to prevent effects like Plaza of Pride or Seal of the Hand (Core Set, 32). Or, you may use it in the standing phase, to keep your opponent’s most powerful character knelt. You may even use it on your own characters, keeping Ser Barristan Selmy (True Steel, 107) knelt if you anticipate your opponent’s Valar Morghulis(There Is My Claim, 80). With the power of Dragonstone Castle at your back, even the most stalwart opponents will be forced to recognize your rightful claim.