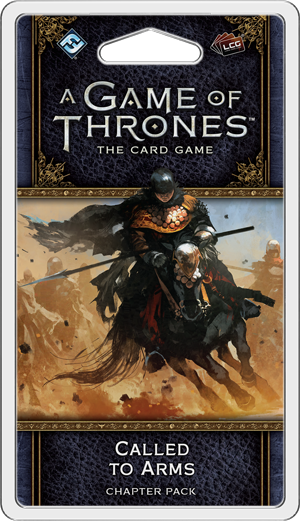 “Lady Catelyn, you are wrong.” Brienne regarded her with eyes as blue as her armor. “Winter will never come for the likes of us. Should we die in battle, they will surely sing of us, and it's always summer in the songs. In the songs all knights are gallant, all maids are beautiful, and the sun is always shining.”
–George R.R. Martin, A Clash of Kings

Fantasy Flight Games is proud to announce Called to Arms, the second Chapter Pack in the War of Five Kings cycle forA Game of Thrones: The Card Game!

The banners have been called in the War of the Five Kings. In the north, Robb Stark gathers his armies around Riverrun, preparing to strike out at Tywin Lannister’s forces. Joffrey Baratheon has ascended the Iron Throne in King’s Landing, Renly Baratheon has been crowned in Highgarden, and on the islands of Dragonstone and Pyke, Stannis Baratheon and Balon Greyjoy plot their own rise to power. Before long, great armies will march onto the field of battle, while subtle intrigues and assassins’ daggers decide the fates of countless others.

Like Across the Seven Kingdoms before it, the Called to Arms Chapter Pack continues to follow the events of A Clash of Kings. A new King version of Balon Greyjoy challenges all enemies of the Iron Isles, even as two new attachments give you ways to crown your other characters and make them Kings. You’ll also find iconic characters like Dolorous Edd and Shae entering the game for the first time, even as other cards lend new importance to loyal cards. Finally, this pack continues to introduce a focus on the seasons of Westeros with two new agendas! 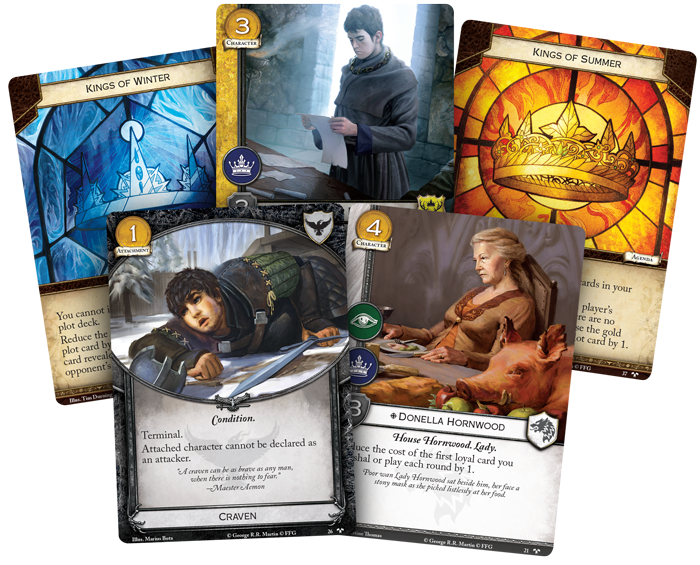 Kings of Summer, Kings of Winter

In Westeros, seasons can last for years. A long summer means bounteous harvests and prosperity, even for the smallfolk. A harsh winter can doom hundreds to death through cold and starvation. As A Clash of Kings begins, white ravens fly out from the Citadel in Oldtown, bringing word of summer’s end. Soon, everyone in Westeros, from the greatest lord to the lowliest servant will need to contend with the howling winds of winter. It’s fitting, therefore, that summer and winter begin to play a larger role in your games of A Game of Thrones: The Card Game. 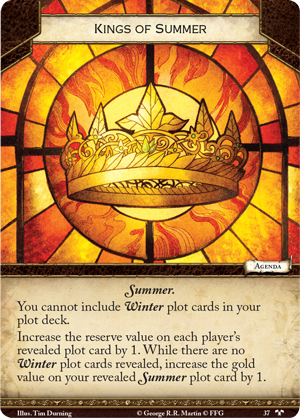 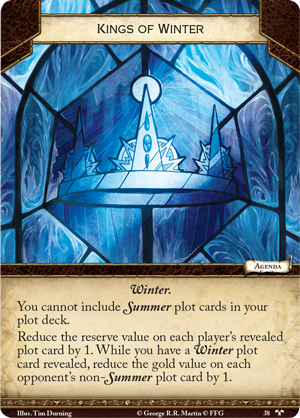 For instance, you may choose the Kings of Summer agenda. With this as your agenda, you are prevented from including any Winter plots in your plot deck, and the reserve on each player’s revealed plot card is increased by one. Furthermore, while there are no Winter plot cards revealed, you can increase the gold on your revealed Summer plot by one.

Ultimately, these two agendas institute a season—either the balmy heat of summer, which blesses both players with increased reserve, or the freezing chill of winter, which may force you to discard cards you would have rather kept. Of course, the agenda wouldn’t be very useful if it didn’t give you some kind of benefit over your opponent. Deciding if your deck cares more about benefitting itself or hurting your opponent can be a useful way of determining which agenda best suits your deck. 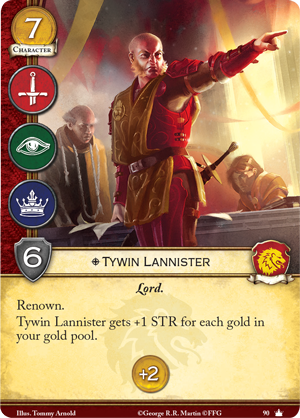 It’s also important to consider the greater impact of increased or reduced reserve. For instance, the Kings of Summer agenda increases each player’s reserve, but that won’t do your opponent much good if you’re playing House Lannister and discarding your enemy’s cards as fast as he draws them. Holding extra cards in your own hand can prove extremely valuable, however, and the extra gold from Kings of Summer is always useful for ambushing characters or fueling Tywin Lannister (Core Set, 90).

Alternatively, you might want to use the Kings of Winter agenda to reduce both players’ reserve and attack your opponent’s gold supplies. House Stark has already shown its preference for Winter with cards like Winterfell (Wolves of the North, 17) and As Hard as Winter (Wolves of the North, 22). A reduced reserve only hurts if you’re close to your reserve in the first place, and factions like House Stark and House Greyjoy are well known for running out of cards relatively quickly. In these circumstances a reduced reserve and less gold can hurt your opponent much more than yourself. 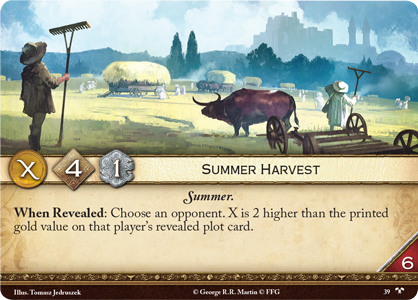 Of course, you’ll need plenty of Summer and Winter plots to gain the full benefit of these agendas, and this Chapter Pack introduces a new plot for each season. On one side, you gain Summer Harvest (Called to Arms, 39). This plot has a gold value of X, and when it’s revealed, you can choose an opponent. The value of X is then two higher than the printed gold value on your opponent’s revealed plot—almost guaranteeing that you come out ahead, at least economically. 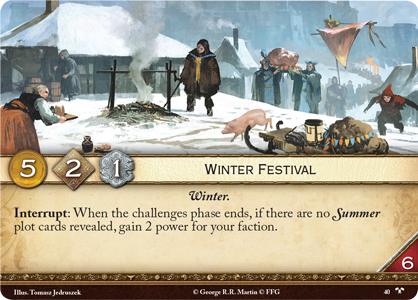 On the Winter side, we encounter Winter Festival (Called to Arms, 40). These seasonal celebrations advance you much more directly towards victory, but they can also be easily disrupted by the opposite season. If you have Winter Festival in play, when the challenges phase ends, you immediately gain two power for your faction, provided there are no Summer plots revealed. When you get close to victory, Winter Festival may just give you the tools you need to seal the game in your favor, especially for factions like the Night’s Watch that prefer to sit back and defend challenges.