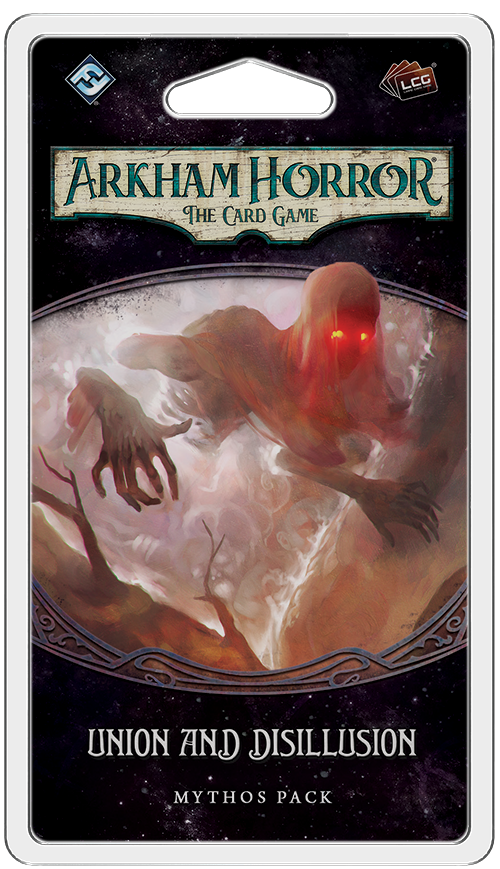 “There had been no wild legends at all since the witch trials, and even then these western woods were not feared half so much as the small island in the Miskatonic where the devil held court beside a curious stone altar.”
–H.P. Lovecraft, "The Colour Out of Space"

Your search for answers following the disappearance of four people from a Silver Twilight Lodge event has led you to the darkest corners of Arkham. From the dilapidated Witch House in French Hill, to Hangman’s Hill, and even the shadowed halls of the Lodge itself, you have relentlessly sought the truth, despite meeting impossible obstacles at every turn, all stemming from a past that the city itself seems desperate to hide. But now, you will leave the streets behind and take to the Miskatonic, where a small island sits waiting, drawing you in with the promise of answers even as it repels you with the lonesome birdsong and foreboding stone pillars.

Fantasy Flight Games is proud to announce Union and Disillusion, the fourth Mythos Pack in The Circle Undone cycle for Arkham Horror: The Card Game— now available for pre-order at your local retailer or online through our website! 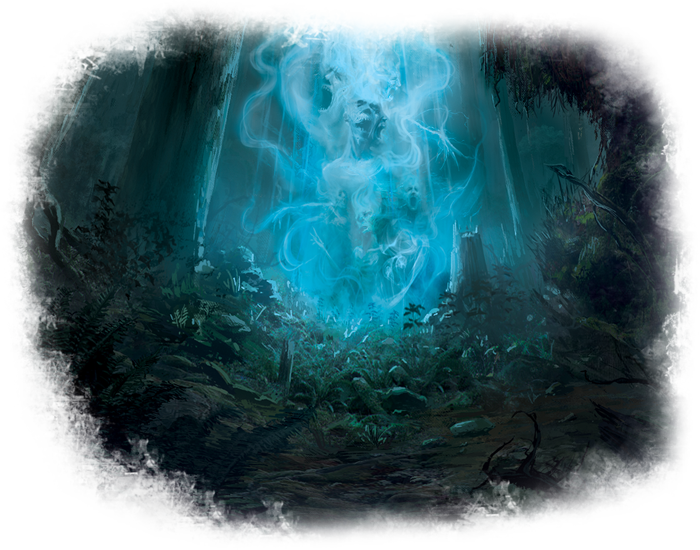 You are at a crossroads. Reflect on the choices you have made. You shall be confronted with a terrible dilemma.

After your brush with the Silver Twilight Lodge in For the Greater Good, you journey to the banks of the Miskatonic River. Two bridges span the river, connecting the Downtown and Rivertown neighborhoods, and in the midst of the river, the Unvisited Isle. “Welcoming” is a word few would use to describe this place—the foggy shores are barren, and as you row closer, you favor a steady, silent pace, as if to keep the river itself from noticing. Not a soul greets you as you draw closer to the island, save for the judging gaze of ghostly birds that observe you from the trees. In the distance, a pillar of spectral energy is rising into the clouds, a vortex of otherworldly mist spiraling about it. 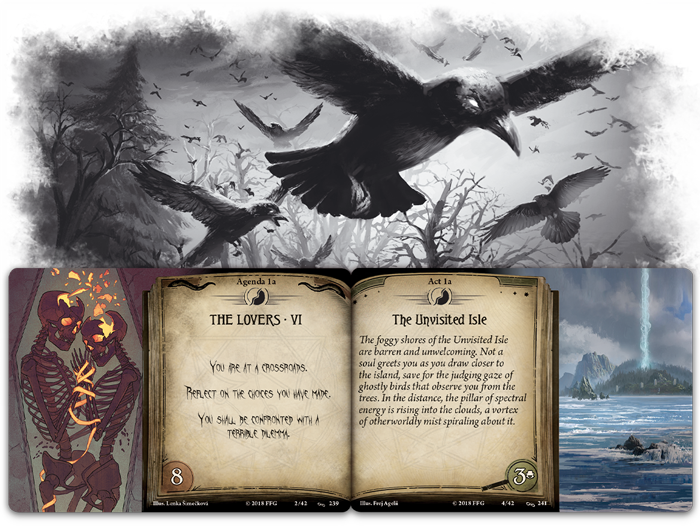 Ghosts are not the only enemies that return to haunt you in The Circle Undone cycle. Union and Disillusion features the return of the Whippoorwill (Union and Disillusion, 266), whose mournful cries first echoed in your mind in The Dunwich Legacy. But now, they are accompanied by more winged fiends like the Spectral Raven (Union and Disillusion, 267). When one of these foul avians engages you, you must either resolve the haunted ability on your location or double the creature’s fight and evade values for the round! And as the raven bears both the alert and retaliate keywords, you'll be placing yourself at a far greater risk of becoming bogged down and overwhelmed by the flock.

As you dodge the beating wings to explore the island, you find braziers scattered at various locations like theForbidding Shore (Union and Disillusion, 250). You can light or douse these braziers with the new Circle action, placing a resource on the location to signify when its brazier is lit and removing the resource when the brazier is no longer lit. Lighting a brazier does no immediate harm or good on its own, but it may cause other effects to trigger—lighting these flames may help push back the heavy mist, allowing you to further explore the island, but it may also be the key step in completing the ritual that has already begun. How far can you push Arkham to the brink of chaos without surrendering the city to the dark forces battling for control of it? Whether dead or alive, somewhere in the dark there are four poor souls waiting to be found. 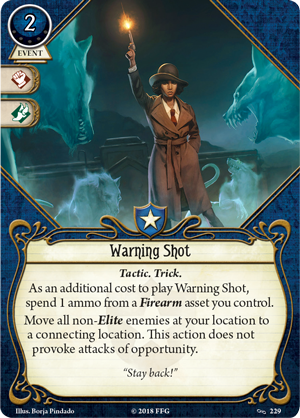 As you become separated from the rest of Arkham by both physical distance and the gravity of what you know, Union and Disillusion plays with the idea of movement more than any other Mythos Pack in The Circle Undone cycle. Even if you should scream for help, no one from the mainland would be able to reach you before you meet your fate in the watchful woods. But if you choose to embody a Guardian and find yourself in over your head, surrounded by enemies, you can try to force them back with aWarning Shot (Union and Disillusion, 229), pushing all non-Elite enemies to a connecting location and buying yourself a little time to ready your weapons, get help, or slip away into the mists.

While Guardians repel, Seekers can draw information from anEsoteric Atlas (Union and Disillusion, 232) to move themselves two locations, further than any Shortcut (The Dunwich Legacy, 22) can offer. And if this is still not enough, Rogues can make use of aDecoy (Union and Disillusion, 234) to automatically evade a non-Eliteenemy for a distant ally if they have the proper funds. Even if your team must spread out across the entirety of the Unvisited Isle, you'll be able to influence and aid one another like never before. Isolated from the rest of your city by the muttering Miskatonic, all you have on this mission is each other.

Throughout The Circle Undone cycle, you are assailed by Geists and spirits, but perhaps not all of the dead are against you. A Guiding Spirit (Union and Disillusion, 236) can lend you the knowledge gained during its own life to increase your intellect. However, as this spirit is part of the Mythos itself, you cannot choose to protect it. Non-direct horror must be assigned to your Guiding Spirit before it can be assigned to your investigator. Then, if the spirit is defeated, you must exile it, removing the card from your deck until you repurchase it with another experience point. In a place like Arkham, an Ally from beyond the veil can be invaluable. Even if their form matches the wights that haunt your every waking moment, this is no time to be particular.