Fantasy Flight Games SKU: FFGAHC51
Regular priceCHF 20.00 CHF 20.00
/
This product is currently not in stock.
It usually ships in 2-4 weeks after we received your order.

There was a night when winds from unknown spaces whirled us irresistibly into limitless vacuum beyond all thought and entity.

Across the five cycles of Arkham Horror: The Card Game, you’ve encountered new investigators in each deluxe expansion, giving you more and more options for building your decks and exploring the mythos. Now, for the first time, you have the chance to invite five new faces to your games with a new type of product—Investigator Starter Decks!

Each Investigator Starter Deck includes a fully pre-built and ready-to-play 34-card investigator deck, as well as 26 additional cards that can be used to upgrade your deck as you play through a campaign. Perhaps you’re entirely new to the game—if your friend has a Arkham Horror: The Card Game collection, no longer do you need to buy your own Core Set or build your own deck to join in a campaign. You can simply pick out your favorite Investigator Starter Deck and start playing immediately.

Even if you’re a veteran player, there are plenty of reasons to pick up these Investigator Starter Decks. All five of these investigators are brand-new to Arkham Horror: The Card Game, and three of them are completely new to the Arkham Horror Files universe! Every starter deck is primarily composed of new cards entering the game for the first time, making these expansions the ideal way to quickly grow your player card collection and discover new ways to play. And of course, they’re perfect for helping a friend get started on their first campaign of Arkham Horror: The Card Game! 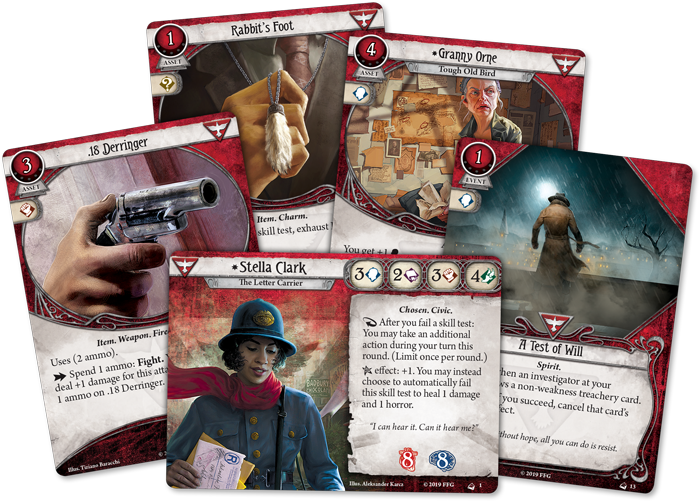 Delivering the mail six days a week in all kinds of weather wasn’t an easy job, but Stella loved knowing that she was helping people connect with one another. Then, she started finding the letters from Kingsport, calling her to eldritch mysteries—a call she chooses not to ignore, but to chase down. Stella Clark (Stella Clark Investigator Starter Deck, 1) is well accustomed to failure, but she’s also well accustomed to pushing past it. As Stella, if you fail a skill test, you gain an additional action that you can take during your turn this round, giving you just one more opportunity to prove people wrong and push onward.

Like Stella herself, this starter deck is packed with cards that can reward you even when you fail. Grimm's Fairy Tales (Stella Clark Investigator Starter Deck, 6), for example, lets you heal one horror from an investigator when they fail a skill test at your location. Failure also gives you the chance to play Grit Your Teeth (Stella Clark Investigator Starter Deck, 15) and boost all of your skills for the remainder of the round—something that’s certain to be useful with the extra action you gain from Stella’s ability. 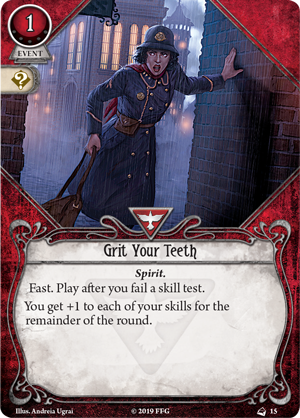 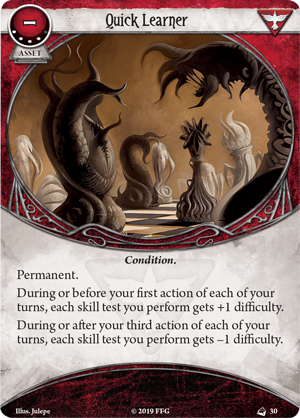 No matter what campaign you’re playing, you’ll start gaining more experience and you may decide that Stella needs more ways to take down the monsters in her way. If that’s true, you could do much worse than picking up an .18 Derringer (Stella Clark Investigator Starter Deck, 22). This trusty little pistol deals good damage, and if you ever fail your test, you reload the spent ammo and increase your combat for your next attack! Stella Clark is also well suited to invest in Quick Learner (Stella Clark Investigator Starter Deck, 30), a permanent asset that increases the difficulty of your earlier actions in exchange for decreasing the difficulty of your later actions. Naturally, this card is best if you’re getting more than three actions, and it also doesn’t hurt to have plenty of ways to reward yourself for failure.