Arkham Horror: The Card Game - Dark Side of the Moon (EN)

Arkham Horror: The Card Game - Dark Side of the Moon (EN)

Fantasy Flight Games SKU: FFGAHC41
Regular priceCHF 20.00 CHF 20.00
/
This product is currently not in stock.
It usually ships in 2-4 weeks after we received your order.

“All life is only a set of pictures in the brain, among which there is no difference betwixt those born of real things and those born of inward dreamings...”

Your adventures in The Dream-Eaters cycle have drawn you across the colorful and deadly Dreamlands, bringing you face to face with creatures that defy explanation. You came here in search of evidence that proves this world’s existence to those you left behind, and hopefully save both this world and the other dreamers trapped within it. Now, a rescue mission draws you to the far side of the moon, where the one person who may hold the key to your entire investigation has been taken by murderous creatures who now guard their prisoner with a watchful eye.

Fantasy Flight Games is proud to announce Dark Side of the Moon, the third Mythos Pack in The Dream-Eaters cycle for Arkham Horror: The Card Game—now available for pre-order at your local retailer or online through our website with free shipping within the continental United States! 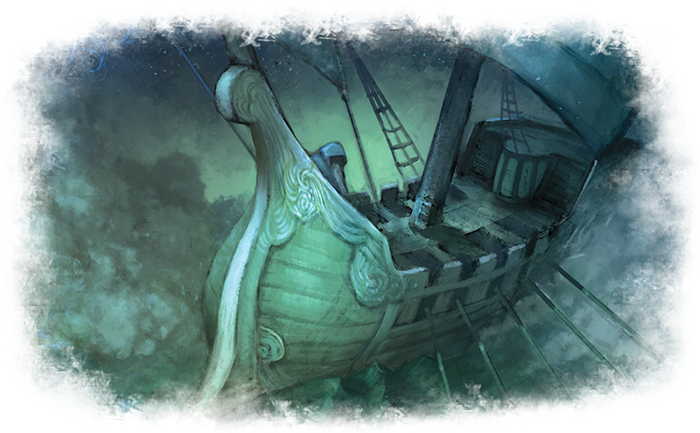 Dark Side of the Moon is Scenario 3–A of The Dream-Quest campaign for Arkham Horror: The Card Game. This scenario can be played on its own in Standalone Mode or combined with the other expansions in The Dream- Eaters cycle to form a larger four or eight-part campaign.

After the events of The Search for Kadath, the investigators who ventured into the Dreamlands are drawn even further from the world of the waking than they could have ever thought when Virgil Gray, the occult author whose stories started this whole adventure, is taken to the cold, distant moon. The silence of the place is deafening. There is no wind whistling through the air, no chirping of birds, no idle sound of any kind. This is a dead world. Though you know danger lurks around every corner, you hear no sign of the beasts or the Corsairs who call this place home. You must remain even quieter in order to stay hidden. You know that Virgil is being held captive somewhere in the vast, strange city of the moon-beasts. You must be quiet and cunning if you are to find him and escape unnoticed. 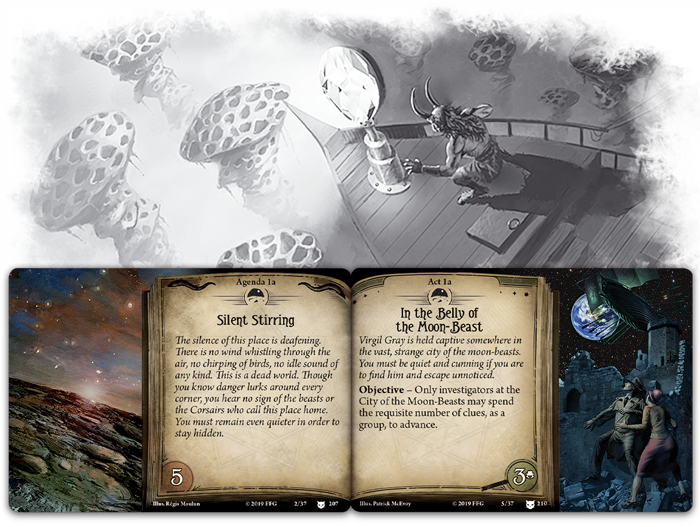 Remaining hidden will prove to be the most difficult and most important part of your rescue mission as you must contend with the Alarm Level. At the start of this scenario, each investigator must place 1 doom on their investigator card, marking their current “alarm level.” While your alarm level is marked using doom tokens, it is important to note that an investigator’s alarm level is not doom, and it does not count toward the agenda’s doom threshold, but it does add a new sense of urgency to your mission.

As you attempt to escape from the grasp of the moon-beasts, your respective alarm levels may increase or decrease based on your actions and decisions. A higher alarm level means you are closer to being discovered, which will significantly hinder your attempts to escape, but if you do not take any risks, you may never recover Virgil Gray and fail in your mission altogether. Your alarm level has no effect on its own, but it may alter or strengthen other encounter card effects, such as the Moonbound Byakhee (Dark Side of the Moon, 227) that will pursue you only if your alarm level is three or higher. If an effect raises your alarm level by any amount, you simply place that much doom on your investigator’s card. Likewise, if an effect reduces your alarm level, remove that many doom tokens from your investigator’s card. Take care that you do not raise the alarm levels too high—you cannot hope to save Virgil if you are captured yourself!

A World Your Own 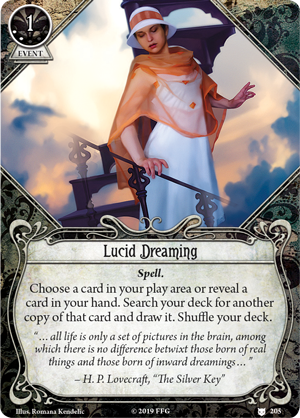 As you prepare to take to the moon, this Mythos Pack offers you a variety of new player cards to fortify your deck and prepare you for the cosmic trials ahead. In addition to two cards for each class, Dark Side of the Moon also offers a new neutral card for investigators to consider with  Lucid Dreaming (Dark Side of the Moon, 205). This Spell offers you greater insight into your investigator deck and control over it, allowing you to choose a card in either your play area or your hand and search your deck for another copy of that card and draw it. While surely a boost for any investigator who includes multiple copies of cards in their deck, this may prove particularly useful for the new Guardian Tommy Muldoon (The Dream-Eaters, 1), ensuring that he has a new copy of a favored asset in hand when one on the field is about to be defeated, or for Mandy Thompson (The Dream-Eaters, 2) if she is looking to use her ability to gather every Segment of Onyx (The Dream-Eaters, 21) in a single swoop.

But while such new powers over your sleeping mind are wonderous, your time in the Dreamlands is beginning to take its toll. This manifests in the form of a new Weakness, False Awakening (Dark Side of the Moon, 233). False Awakening begins each game next to the agenda deck, with one doom on it. If you wish to dispose of this, you must use an action to test any skill against a value of 2. This may not seem so bad initially, but the test gains +1 difficulty per investigator, meaning the very bonds that have allowed you to make it this far are now working against you, forcing you to face a difficulty value of six in a four-player game before you have even had a chance to build your board state. Success means removing False Awakening from the game, but only until your next scenario begins. If you are afflicted by this Curse, there is no true hope for escape. The pull of nightmares will always be there, waiting. As a small comfort, because your team is all sharing in the same dream, any investigator may trigger the action ability to free you for the time being. But are they truly with you, or is their presence nothing more than another dream?