Lord of the Rings: The Card Game - The City of Corsairs (engl.)

"Looking thither they cried in dismay; for black against the glittering stream they beheld a fleet borne up on the wind: dromunds, and ships of great draught with many oars, and with black sails bellying in the breeze."
–J.R.R. Tolkien, The Return of the King

After a long journey and many surprises, several of Middle-earth's greatest heroes arrived at the city of Dol Amroth, only to find it under siege by a fleet of Corsairs. Taking up their arms once more, the heroes joined Dol Amroth's defense and helped to win the day. Their work, however, was not yet complete…

Fantasy Flight Games is proud to announce the upcoming release of The City of Corsairs, the thrilling conclusion to the Dream-chaser cycle of Adventure Packs for The Lord of the Rings: The Card Game!

With its new scenario, The City of Corsairs grants your heroes the opportunity to board the Dream-chaser one last time, set sail for the lands of Umbar, and conclude your business with the Corsairs once and for all. But will you truly be ready for the dangers that await you? Featuring not one, but two new encounter sets, The City of Corsairschallenges you to navigate Umbar's coastal waters and battle past Corsair Ships before you set foot on land to pursue the Númenorean artifact that was stolen from you. Don't expect this task to be easy, though! In their lands, the Corsairs you'll face are deadlier than ever, and the Númenorean artifact grants them a strange and corrupting power. 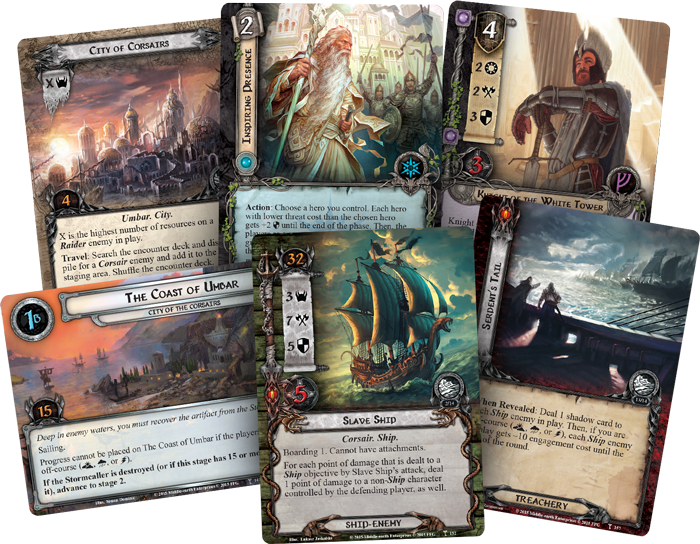 Fortunately, in The Lord of the Rings: The Card Game, you never have to travel alone. Not only does the game allow you to adventure with up to as many as three of your friends, but it also allows you to fill your deck with numerous allies and as many as three heroes. And these include some of the noblest and most notable names in The Lord of the Rings, such as Prince Imrahil (The City of Corsairs, 138), who offers you his support in The City of Corsairs.

Prince Imrahil and the Support of Gondor

Without a doubt, the arrival of a new Tactics version of Prince Imrahil is one of the highlights of The City of Corsairs. He bears the same two Willpower, three Attack Strength, two Defense Strength, and four Hit Points as the Leadership version from A Journey to Rhosgobel. He also retains the same eleven Threat Cost. However, as Prince Imrahil moves from inspiring Leader to Tactical commander, he trades his self-readying Response ability in favor of a new Combat Action: 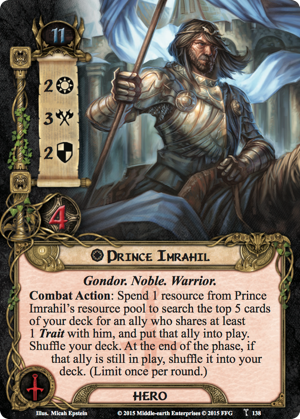 "Spend 1 resource from Prince Imrahil’s resource pool to search the top 5 cards of your deck for an ally who shares at least 1 Trait with him, and put that ally into play. Shuffle your deck. At the end of the phase, if that ally is still in play, shuffle it into your deck. (Limit once per round.)"

Although it's limited to the Combat phase and can only target allies that share at least one of his three Traits, Prince Imrahil's ability functions in most other ways like a built-in Sneak Attack (Core Set, 23), making it fantastically ripe for exploration. The fact that Imrahil's ability is restricted to allies that bear one of his three Traits actually does less to limit your exploration than to get it started. After all, a quick survey of the allies released in products up through The Thing in the Depths reveals six Noble allies, thirty-two Gondor allies, and thirty Warriorallies. There exists, of course, some overlap between these traits so that you're not looking at 72 different allies, but the fact remains that Imrahil can target a tremendously varied array of allies, an array that only grows larger with The City of Corsairs and its three new Gondor allies.

Of course, if you're paying for Imrahil's ability each round, you're going to want to get as much impact per use as possible. To that end, you might want to dig up allies with abilities that trigger when they enter play, such asMablung (The Land of Shadow, 5) or Envoy of Pelargir (Heirs of Númenor, 18). Alternatively, you can find efficiency with allies who grant you more than mere defense or attack strength, such as  Legolas (Treason of Saruman, 5) and his card draw. However, you certainly don't need "enters play" or Response abilities on all your allies to make great use of Imrahil's ability. One Tactics resource is a small price to pay to gain immediate access to powerhouse allies likeGlorfindel (Flight of the Stormcaller, 6) or Beorn (Core Set, 31), who can immediately swing a perilous Combat phase in your favor.

All told, Prince Imrahil's ability promises to sit at the heart of some of the most exciting new decks from the Dream-chaser cycle, especially when you consider that he can be paired with Tactics Théoden (The Morgul Vale, 134) andÉowyn (The Flame of the West, 2) in a deck that can charge full-speed forward in the Quest phase for eleven Willpower and still have a means to defend against any enemy that shows its face. 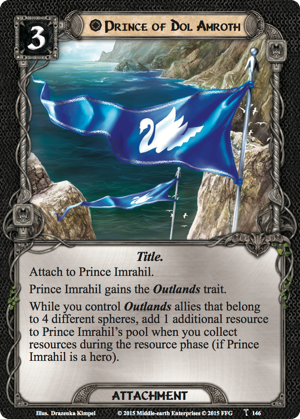 And, in addition to all of this, The City of Corsairs also introduces the Prince of Dol Amroth   Title (The City of Corsairs, 146), which grants Imrahil the Outlands  Trait, expanding your options for allies and deckbuilding even further!